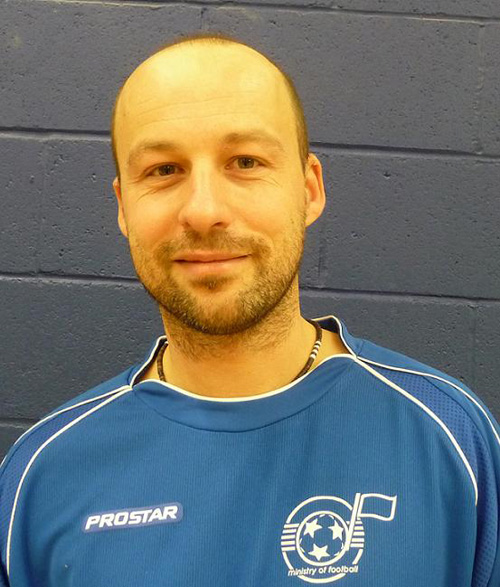 To exemplify its wrongness, and highlight why we need a better way, let’s look at the journey for a 7-year old who has just decided that they want to play football:

Firstly, they have no right to play. Instead they have to trial to see if they can play. This usually means being thrown into a game of strangers and asked to show what they can do. If they aren’t deemed good enough yet, they don’t get to play at all – for at least another year, when they can trial again. Sometimes the experience of rejection – especially if their friends are successful – can leave a child saying “I don’t like football” or “I’m no good at football”.

If they do get to play, they then need to commit to play every week for a Aug to April season. Every other weekend this means they must travel to an away ground, which often means a big chunk of the family weekend now needs to revolve round their game. It also means many weekends playing in the icey cold, and several others where games are postponed. If you add up the total number of hours of weekend time against the actual amount of play time, it’s likely that the child’s family will have to invest two hours of their weekend time for every hour’s football their child plays.

Over the course of a season they will spend hours as a substitute watching their mates play, waiting their turn. They play their games surrounded by adults (whose aggregate behaviour is often demented), are usually told what to do (where to play, how to play etc) by an adult, and are mostly judged on how well they’re doing by the scoreline in their games – something that’s often out of their control. Quite often this experience puts many children and families off football altogether.

The child is grouped into a team (and the team is grouped into a league) according to their age. It is wrongly assumed they have the same learning need as all other seven year olds. Because of this, they may well win or lose by many goals. It is not a good learning experience to win or lose 10-0. Yet the result is celebrated or commiserated by some parents and coaches for days after. Losing 10-0 regularly becomes disheartening for the child too of course. But whether they win or lose, even if they are winning easily or struggling to cope, they have no option to move to a league or division that is better suited to their needs. They may keep winning or losing 10-0 for another year.

Their practice time in the week is spent rehearsing what they need to do to win (or not lose) the next game, and their practice is often interrupted by an adult “coach” (who has been on a coaching course where they have learnt lots of ways to interrupt children playing). Usually the key to the enjoyment and success the child experiences in football will not be down to the football itself, or their own adventure in the sport, but the qualities of the coach that governs their access to it.

Importantly, they might get to the end of their first season, and not ever yet have played football without heavy adult interference or intrusion or on their own terms. Eventually, when they are old enough to say no to their parents, they will realise they don’t like standing on cold football pitches being told what to do, and they will drop out of football altogether. In the very unlikely scenario they are picked for a professional academy, the expectations on the child will soar (from parents and coaches) and it is quite normal to have to commit several hours of a weekend in order to play football for 30 minutes.

This journey is typical of the children we are meant to serve. It is a journey whose every step is organised and controlled by adults. It is a replica of the way professional football is for adults, and we have made the catastrophic error of forcing the same journey onto our children. Worse still, we have not seemed to notice that we’ve done it, and we are doing very little to change it.

The system and set-up for children’s football needs a complete overhaul. Revolution not Evolution. My idea is to completely abolish all children’s leagues, and to outlaw coaching of children aged 5-11. In place of leagues and coaching, I would create ample oportunities for play instead. Local Play Centres could reach more children than currently play football, they could provide them with many more hours of football than they currently get, and they would provide them with learning environments which far surpass in quality those which they have now.

The underlying premises of the Play Centre concept are:

Children will learn to play football well if they are allowed to play football more often and more locally, without the need to commit to season-long teams, and in environments that allow them to immerse themselves in games uninterrupted.

Children aged 5-11 don’t need coaching. Yes, they can benefit from very good coaching from highly-skilled people – but it is my contention that they are much better off with no coaching at all than with a potluck selection of various anti-coaching and non-expert tuition.

The main learning aid for child footballers is each other. It is their team mates and opponents that give them the puzzles they must solve. It is essential that the grouping of children into games is done expertly in order for the learning aids for all children to be appropriate. Grouping by age as we do currently does not provide all children with appropriate learning aids. There is an essential adult role in the grouping of children for football, and this role is highly-skilled.

Football is for all children. Importantly this is not only for the benefit of the children, it is also essential to the development of football and footballers. In my experience, it is almost impossible to predict which primary schoolers will grow up to be great footballers, and thus we need to give all children the chance to thrive in excellent learning environments. We need to make the base of our pyramid as wide and inclusive as possible, and treat the beginner footballer with just as much importance as the advanced player.

What is a Play Centre?

A Play Centre is a place where children can come to play football.

What? A set of pitches, with goals and footballs – and expert Play Centre staff.

Where? Anywhere and everywhere. At school (playground, hall), in parks, in sports centres, wherever team practices and games currently happen. Indoor or outdoor, all surfaces.

Play Centres would take the place of all children’s football for 5-11 year olds currently organised, supported or endorsed by the FA. They would allow children to experience the joy of football locally and easily, and would bring the opportunity of deep practice into the weekly schedule.

At a Play Centre a child is helped to find a small-sided game that is appropriate to their needs and level of play. These games are supervised by staff, but are not interrupted to coach. The children would be free to explore the game, to try new things and to learn through play. The maximum game size for 5-11 year olds at Play Centres would be 5v5, although 3v3 and 4v4 would be the norm. In an hour’s session, a child would get over 50 minutes of Active Learning Time – defined as “game time with ball in play and football decisions being made”. (This is in stark contrast to what they currently get at a regular team practice – which is usually not game-based – or a weekend game – where game-size can be 7v7 or 9v9 and the environment is tainted by adult stress and instruction).

Play Centres would host mini-tournaments and short duration competition for small-sided football. These competitions would be in-line with all the key values of the Play Centre and would be integral to the overall Play Centre programme. The aim of these mini-tournaments would be to allow children to experience competitive environments, and compete with friends against teams they don’t usually play. An example of such a tournament might be three local Play Centres getting together to arrange a 3v3 tournament over two weekends. Any such competition would be open to all abilities, with players grouped into teams, and teams grouped into leagues, based on their learning needs as usual.

To read about key values you can visit Mark’s blog at: ministry-of-football.com