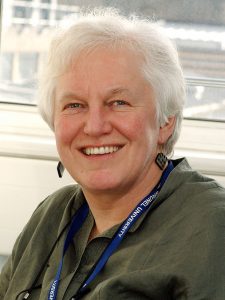 Professor Celia Brackenridge OBE, died in 2018 aged 67, was an international sportswoman, researcher and campaigner for gender equality and against child abuse in sport.  Celia, a founder member of the Children’s Football Alliance (CFA), was a stalwart in supporting the CFA when addressing the many formal authorities into listening to NGO’s that deliver children’s sport without branding. Celia, best described the CFA as ‘Development through football as well as development of football’.   There is much to celebrate in Celia’s work.  This article is a homage and a thank you to a wonderful person, with a legacy steeped in humility, integrity and humanity.

‘I remember sitting in a packed room at the National Children’s Bureau with Heads of various sports establisments.  I was waiting to introduce the Children’s Football Alliance (CFA); a new organisation that had established the need for an NGO to support children outside the radar of football associations.’  ‘Celia, set next to me and handed me her note saying, ‘they are only suits and ties’.  ‘From that moment onwards the CFA was born.’  Ernie Brennan, Founder of the CFA.

Professor Celia Brackenridge OBE, was a tireless advocate for the protection of children in sport, and many of the safeguarding procedures currently in place, at both national and international levels, can be traced back directly to her pioneering work on the sexual abuse and harassment of young sportspeople by their coaches in the 1980s and 1990s.

For many years, the sports establishment was firmly in denial of what was happening behind closed doors, but Prof Brackenridge was an iconoclastic figure who was neither perturbed nor discouraged by the barriers that others sought to place before her.

She joined Brunel University London in 2005 as Professor and Director for Youth Sport and Athlete Welfare, having already established considerable academic credentials at other universities for two decades.

Her colleague Professor Tess Kay, Brunel’s Dean of Research, said: “Alongside her extraordinary achievements and global recognition, to us Celia was an integral part of the fabric of our university department: accessible, working alongside us, being supportive in all the small and sometimes larger challenges and idiosyncrasies of academic life.

“Every now and then, in the face of her expertise and wisdom, you couldn’t help feeling ‘this is the Celia Brackenridge’ – but she never expected that reverence.”

Celia Brackenridge excelled at sport in her youth, studying at the Bedford College of Physical Education and then for a Bachelor of Education at the University of Cambridge, gaining a first. She was selected for the England lacrosse team in 1969, before going to Cambridge, and represented England and Great Britain for 14 years, including as team captain. She then followed her playing career with a year’s tenure as the national team coach.

She became a physical education teacher but, within a year, moved to be a full-time lecturer at Lady Mabel College – now part of Sheffield Hallam University. It was in Sheffield that she met colleague Diana Woodward, and their long relationship would later, in 2006, be legally recognised by a civil partnership.

In 2001, Prof Brackenridge began a ground-breaking five-year, million-pound project, funded by the Football Association, to look at child protection in youth football. Her team spoke to 189 children, plus officials and coaches, uncovering not only sexual abuse but also a culture of bullying and psychological abuse. But the project was ultimately pulled as result of internal disputes within the then football establishment. The research resulted in her 2006 book Child Welfare in Football, and has become case material in Clive Sheldon QC’s current football abuse inquiry.

With funding from the National Society for the Prevention of Cruelty to Children, Prof Brackenridge launched the Brunel International Research Network for Athlete Welfare, which aims to broaden research beyond sexual exploitation and look at emotional abuse, relationship breakdown, disordered eating, self-harming, over-training and other child exercise concerns.

“Celia always had an eye on the future, and the network has now grown to 60 academics from 20 countries,” explained Dr Daniel Rhind, Associate Dean of Student Experience for Brunel’s College of Health and Life Sciences, who took over leadership of the network when Prof Brackenridge retired. “This ensures that the fight for athlete welfare continues.”

Dr Rhind also remarked that Prof Brackenridge had “a unique ability to work with early-career researchers as well as those working at the highest level of sport.”

A founder member of the Women’s Sports Foundation, and its first Chair, she was an early campaigner for gender equality in sport, an issue with which she felt far less progress has been made.

She transitioned to part-time employment in 2010 as part of a phased retirement, before fully retiring as professor emerita at the end of 2013. However, she remained in demand to advise international organisations, including FIFA and Unicef, through whom she worked with the Olympic and Paralympic movements, and was a founding board member of the charity Safe Sport International.

Appointed an OBE in 2012 for services to child protection and equality in sport, Prof Brackenridge was appointed as child protection expert on the Dame Janet Smith Review into abuse by Jimmy Savile at the BBC.

A diagnosis of leukaemia meant that her final years were extremely challenging from a health perspective. By the time she was awarded the Sunday Times Sportswoman of the Year Lifetime Achievement Award in December 2016, she had become too ill to continue being involved in putting the record straight on child abuse in sport. Describing the award as ‘bittersweet’, she added that “many researchers never see their work have an impact on society – but I am fortunate enough to have seen mine produce a sea-change in sport.”

Her colleague Dr Dan Bishop, Researcher and Senior Lecturer in Sport & Exercise Psychology, remarked that Prof Brackenridge had “an effervescent personality with great humanity, intellect, acumen and pragmatism, who lit a spark in me every time she spoke.

“Although I miss Celia, I feel grateful and privileged to have known her.”

Prof Brackenridge’s life’s work to raise the awareness of sexual abuse in sport is preserved in the Brunel University London Archives, which are open to the public for research. Her personal papers are lodged at the University of Chichester.

Professor Celia Brackenridge OBE died of leukaemia on 23 May 2018, aged 67. She is survived by her partner, Diana, and her two stepsons, Alex and Nick.