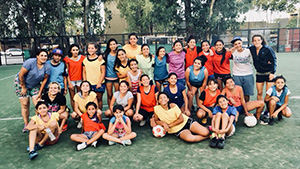 The first case of Covid-19 in Argentina was identified on 3 March 2020, with the first death on 7 March, both involving men in Buenos Aires who had returned from Europe. On 11 March, the same day that the WHO declared a pandemic, President Arturo Fernández announced a 14-day quarantine for anyone arriving from high-risk countries, followed on 19 March by the nationwide introduction of one of the strictest lockdowns in Latin America. This lockdown was in place until 26 April, when restrictions were relaxed in some parts of the country, where infection rates were low. However, the capital remained in lockdown until mid-July, with an initial limited relaxation overturned and redoubled after a spike in cases saw the country pass 100,000 cases and 1,900 deaths on 13 July, with 49.7% of cases in the capital, which is home to 7.2% of the population (Ministry of Health, 2020). Within Buenos Aires, the large informal settlement of Villa 31—home to feminist football CSO La Nuestra Fútbol Feminista (henceforth La Nuestra)—became ‘the epicenter for infection over several weeks’ (Acuña, 2020), accounting for almost 50% of new cases in Buenos Aires during late May (Primera Edición: el Diario de Misiones, 2020). During the strict lockdown, no physical exercise outside the home was allowed, and when there was some relaxation of this in early June, the leader of Buenos Aires local government explicitly banned group activities while also acknowledging the risks to women of exercising alone (Infobae, 2020a). Despite maintaining the world’s longest-running lockdown through to November 2020 in many parts of the country, including the capital Buenos Aires, Argentina’s Ministry of Health announced on 19 October 2020 that they had passed one million confirmed cases of Covid-19, with 26,716 Covid-related deaths to that date (Ministry of Health, 2020). Just over half of the cases, and of the deaths, had been recorded in the province of Buenos Aires, home to the great majority of the country’s women’s football teams.

Since 2007 THE OUR FEMALE FOOTBALL holds a training space in women’s soccer on the Güemes court for girls and young women that is complemented by a workshop space for reflection from a gender perspective.

Although there are other women’s football teams in the neighborhood and in the city, they do not have access to basic sports and technical training; furthermore, there is very little provision for workshop spaces to facilitate channeling and addressing problems the participants face on a daily basis. Thus, La Nuestra has become the only neighborhood organization that proposes a space forwomen’s football, integrating it to work with a gender perspective, encouraging women to do a sport that – in general, they do not have the possibility of practicing and, from that proposal, to address issues related to gender stereotypes, sexual and reproductive health, gender based violence, discrimination, use of free time, social inclusion, friendship and citizenship. 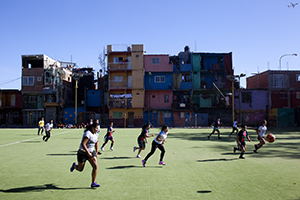 The multi-faceted workshops, support women using sport as a vehicle to learn about citizenship and promote social inclusion.   Raising the profile of women’s football in the neighborhood will benefit health, families, education, equal opportunities and community cohesion.  The aim of this practice to be sustained and multiplied. 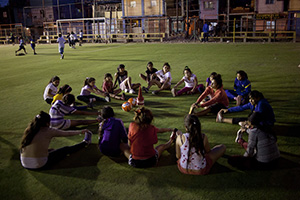 La Nuestra represents today a space that was appropriated by the participants themselves, who continue to build it with their language, customs and presence, by expressing and learning new forms of conflict resolution, channeling the different problems they experience from their position as young women in situations of social exclusion, as well as generating identity and belonging, contributing to the construction of an identity for women’s football.