Give Us Back Our Game campaign was founded by Paul Cooper (National Projects Director and Founder Member of the NCFA) and Rick Fenoglia (Manchester Metropolitan University).  Both parents were arguably at the forefront of lobbying the custodians of English football to change their ways when facilitating the children’s game.  In fact, both gentlemen were invited to sit on the Football Association’s ‘working groups’ in Soho Square which subsequently led to the ‘Respect’ campaign.  Paul revisits a period when every national paper and the BBC were tripping over themselves to cover the outrageous behavior of parents on the touchlines of children’s football.  The fervour for blaming the children’s grass roots game for the England team’s lack of success was and still remains Monty Python esque.

Paul Cooper; In 2008 Capricorn Productions approached me and Rick to take part in a film about children’s football.  They produced a short thought provoking documentary film directed by Ernie Brennan (Managing Director and Founder of the NCFA) on the state of children’s football in England called, ‘Come the Whistle’.

It focused on the ‘adultification’ of children’s football, touchline, parents and coaches’ behavior, as well as children’s development. The findings helped prompt Ernie to start a Children’s Football Alliance with the brief to ‘ring fence’ children’s football and play.

But what has actually changed in grassroots children’s football since the short documentary was made? 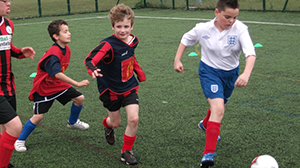 On the wider football front nothing much has changed with the national team. In 2008 England were not at the Euros as they had been knocked out by Croatia on one those forgettable wet nights at Wembley in the qualifiers. At least England qualified for the 2016 but nevertheless packed their bags early after an embarrassing defeat by mighty Iceland (population about the same as the city of Leicester, the surprise winners of the Premier League).

Behaviour on the touch line came into focus again early this year with the headline “Spectators at children’s football matches so violent ‘someone will be killed’ parents warned.” This in a weekend which saw one parent threaten to stab a referee, another head-butt a volunteer linesman and young players threatening to vandalise a dressing room, all in the Surrey Youth League. Three years earlier a parent running the line in a youth game in the Netherlands was beaten and kicked to death by a couple of youth players. The nightmare scenario eluded too in ‘Come the Whistle’ had manifested itself in the most horrific way.

There are however encouraging stories as in some areas of the country grass roots volunteers have worked tirelessly in making children’s football experience a positive and fun one. DontXtheline who appeared in the ‘Come the whistle’ documentary have worked tirelessly week after week with various ground breaking initiatives.

One of the programmes that Mal Lee and his colleagues have started is the excellent ReFspect programme which has been supported by many youth clubs and leagues around the country as well as county FA’s, the PFA and professional clubs, Liverpool, Everton, Manchester United, Arsenal and Sunderland.

Another new initiative from DontXtheline involves a green card, which referees show to highlight incidents of sportsmanship and fair play.

These grassroots organisations that turn up week in week out on the touchlines do this as volunteers and are crying out for funding and a major sponsor. But while groups like DontXtheline have to count every penny, in the world of professional football the game is awash with money. Leicester City this year received three times the prize money Manchester United did in 2008 and the transfer monies, TV deals and wages far outstrip what was happening just 8 years ago. The money in the game is obscene and in comparison, the money given to children’s grassroots football is shameful.

As the rest of this countries’ sports organisations now look to follow corporate football’s greed, we the general public can only sit and read the rest of the world’s observations and comments on GB’s win at all costs approach.

Youth clubs are having to find more and more money as pitch fees and costs spiral (more of that later) and these often have to be passed on in the way of increased subs. Many children are now simply being priced out of the game.

Another area that is in decline is grass roots football pitches. Since the 2012 Olympic Games in London over 100 school playing fields have been sold. They are currently being sold off at a rate of one school playing field every two weeks. Even a modest sized playing field can fetch tens of millions of pounds and even though they are on green belt land, it appears it makes no difference.

The NCFA’s Peace Fields Project tries in vein to combat the importance of preserving community fields through twinning them with Flanders Peace Field, site of the 1914 First World War Christmas Truces. Absolutely no support from the football fraternity has been offered to date.

The FA are building 30 new 3G pitches but according to the Guardian newspaper it comes at a price as around 100 employees have been made redundant to help fund the pitches.  Extraordinary in the current professional football financial climate.

The ‘win at all costs’ philosophy still thrives in children’s football (still mimicking the adults professional game) and it is a bit of a lottery as to whether your child’s football experience is a positive one. The challenges that ‘Come the whistle’ highlighted are still very much evident in the children’s game. Most of the changes have been cosmetic but there is still a hard core of organisations, parents, coaches and others that will continue to fight for the children and their wonderful game.