Skip to content
Football is a team game. So is Life
Article by Leila Talmadge, Trustee of Daytrippers

“Football is an honest game. It’s true to life. It’s a game about sharing. Football is a team game. So is life.” –Joe Namath 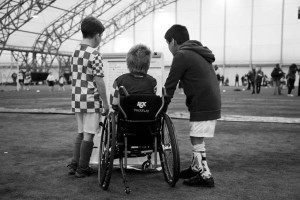 On the 31st October 2014, the London Soccer Dome, formally known as The David Beckham Academy, closed its doors for the last time to make way for a residential development. This building sat in the heart of London and was the largest indoor football venue in the whole of Europe, and also the home of Daytrippers’ Annual Pan-Disability Football Tournament since 2006.

Daytrippers is a children’s charity striving to enable young disabled people throughout the UK to access as many services and activities as possible, creating an inclusive playing field for all ages and interests. Providing days out has proved fundamental over the years as we learn of more and more cut backs in funding, limiting the possibility of experiences for each child. We believe that every young disabled person has the right to a fun and active childhood, and the chance to develop their full potential in life. 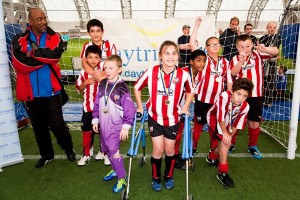 The UK’s Largest Pan-Disability Football Tournament
Our tournament started back in 2006 when Coach Ray Coleman of the South London Feltham Bees approached us. His team sought new experiences as they found that they were playing against the same teams all the time. Ray wanted to introduce his footballers to new teams to increase their experience in the game, and sought funding for them to travel up to Blackpool. This application set our ideas flowing and that is when we combined forces to create the largest Pan-Disability Football Tournament the UK had seen.

Our tournament was open to all abilities, and we welcomed boys & girls from teams all over the UK. The aim was to create an event that would be the highlight of all the players’ football calendars. What made our tournament that little bit special was the team spirit that we encouraged in everyone who attended. Of course there is a competitive spirit when playing any sport, but with the nature of having so many varying abilities in the players, we wanted to encourage a more even playing field, with recognition not only going to the best players, but also players who achieved personal goals.
Flexibility was key. With players split into two age ranges, and within those an additional two skill level based leagues, we tried to ensure that any young disabled person was able to come along and take part. Our referees kept a keen eye on the games progression and if there were one team dominating the leader board it wouldn’t be unheard of for the coaches to encourage their players to give the other teams a chance. This obviously didn’t affect the overall scores, but it did ensure that no one team left feeling totally deflated on the day because they weren’t as strong as their opponents. 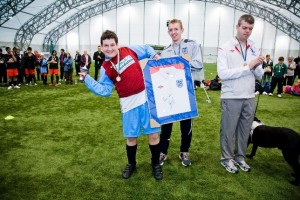 We had teams from all over the UK join us year on year out, with an average of 250 players each year. Players of the tournament would range from a highly talented player, to a player who built up the courage to stand on the pitch for the first time ever. We loved seeing players come back each year with the strong belief that our Football Tournament centered on inclusive fun. One player who came to our very first tournament now even plays for the England CP team, proving that a high level of achievement is always possible.

The changing face of Football

Over all nine tournaments I personally have seen a huge number of changes. After the London Paralympics I was expecting to see a rise in the number of players and teams, when the reality was quite the opposite. As the years have gone on, from our Tournament’s perspective, there has been a noticeable drop in the number of young disabled people taking up football and this has also had an effect on the teams’ structure. 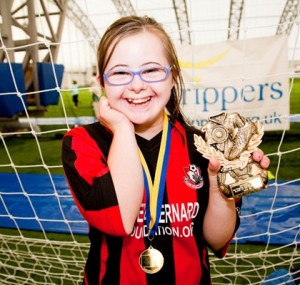 We have noticed some boroughs throughout the UK comment on differing rules, and even the structures of teams have caused discussion. In some parts of the UK girls and boys are not allowed in the same team, then also teams are separated into more refined categories based on the young person’s disability. Although we can understand all of the reasons behind these introductions, especially to make disabled football more in line with the mainstream leagues, unfortunately in our experience it has actually excluded many players.
Daytrippers knows only too well that every young disabled person’s needs are very specific to them, and does not necessarily fit comfortably in any one category. In all our days out we try to create the most inclusive environment possible. Our tournament may not be within the same guidelines as more competitive disabled football, but does every tournament need to be a precursor to professional football? We believe our players are learning something much more valuable by participating in an inclusive team spirit. 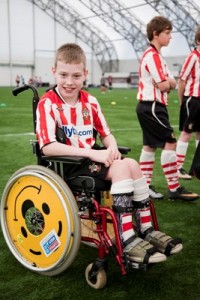 There certainly is a place for directing disabled football along the same lines as all other leagues, and the more professional levels. However, where does this leave a young disabled person who may not ever be able to get to that skill level, but simply loves the game? We have seen a drop in numbers from such players – young people who adore the game, but for example are too nervous to kick the ball. I am sure we can all remember what it would have felt like to be the last person picked for a team when younger. Our tournament was there to encourage that very child to come along, take part, and enjoy the experience, regardless of how good they were at the game.
“One point that I particularly enjoyed was during the lunch break when I was having a kick about with my child when a boy from another team asked if he could join in. Soon there were approximately 30 children from different teams all playing together (allowing me to gracefully beat a retreat). It showed the power of sport to unify.” – Parent, 2012 Tournament

Where do we go from here?

As Joe Namath’s quote says, football is a game about sharing. This in itself is a lesson in life. When players are given a platform to play a game that they love, at whatever level they are able, something magical happens. We are surprised that our Tournament is one of the few we have heard of that embodies this ethos, and maybe that is why it is so successful every year. There is a huge level of passion associated with this sport, and that is very evident at our tournaments, even down to seeing the number of volunteer coaches that tirelessly work with the young disabled people at the weekends to give them the opportunity to play in a team. These teams are self funded, and run by individuals volunteering their time and expertise all out of the love of the game. 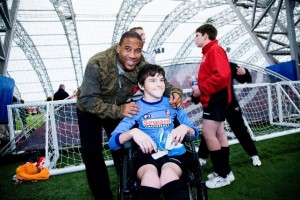 The closure of The London Soccer Dome has meant the end of a very successful era in accessible football, not only due to the facilities that they provided, but also the environment that enabled us to put on the largest Pan Disability Football Tournament that the UK has ever seen. Although saying that, it certainly will not be the end of this tournament for Daytrippers. Feedback given year on year out has proved to us that there is a growing need for more tournaments like ours, enabling all disabled people to get out and play a game that they love so much.

In order to watch a great football film please visit: