As is the general norm in India, I faced the arduous yet simple task of choosing between being an engineer or a doctor after junior college. My love for biology had driven me towards choosing to study to be a dentist. But, the only issue that I had was that I had taken up dentistry and I was also a football coach!

It made no sense as there was no connection. But to me, the logic was simple as I stood witness to the power of sport and how it changed lives. I decided that I shall continue to try and balance my coaching and dentistry aspects altogether. I believe that what I have been through since then is a story worth a share to anyone who reads this. 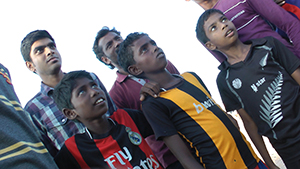 I was a football enthusiast from my childhood. I always wanted to play the ball, be part of a team. I was first introduced to the ball game in Singapore. As a child, I always wanted to kick the ball running around the ground, but I never got a chance. Once, there was a football match going on in a ground near my home, the match was a draw, then there was a penalty kick, in that gripping moment, I ran towards the ball out of nowhere and kicked it. To my luck, it was a goal. That was my first introduction to the game.

The coaching aspect started for me the very next day after I had finished my board exams in Junior college in 2012. I was acquainted with a Dutch coach who taught me the ropes and I have carried on so far until now. The journey though has been one with a lot of sacrifices! I had to miss a lot of classes in university to be with the team, I was naturally very keen on football coaching but somewhere inside I wasn’t completely ready to give up on my education just yet.

My first taste of taking a major decision came when I had to choose between taking my final year examinations in Dentistry and travelling with our team as a coach to a tournament in Spain which was being held during the same dates. I chose to be with the team. It was a very hard decision at that time as missing the final exams meant I was allowed a re-exam only after 6 months. 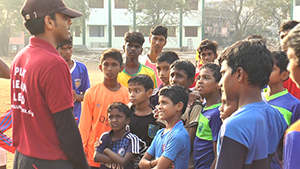 What made me decide? The only plausible reason is “the power of sport”!

After being part of the United Nations Office on Sport for Development and Peace (UNOSDP) and Coaches Across Continents (CAC) programs via an NGO, I had learned the values of sport being used in areas of conflict around the world and how It helped negate negative aspects in the community. I was hooked on to the idea that more could be done with the sport. I wanted my boys in the team to go through a process that not only was aimed at making them better footballers but also sensitize them to various aspects of life and well-being.

I travelled to several villages in the south and central India where the sport is an unheard thing and the way children have been receptive towards playing football for the first time has been tremendous.

That single session of football helps them be happy, helps them break free of worries. In the child’s mind, it might be the biggest thing they did that day, simply playing. It is often regarded as a very simple thing by adults all around but if a little bit more thought went towards the perception of the child I am sure a lot more could be done by coaches, teachers, parents all around the country.

Simultaneously, I had completed my final examinations but I still had to do an internship for one year to get my degree and claim my stand as a dentist. However, one month into my internship in 2018, I was presented with an opportunity to join as the coach for the U13 youth team at Anantapur Sports Academy (ASA), a sport for development initiative in Anantapur, Andhra Pradesh. I had to make a choice between profession and passion. I truly believed in the power that sport can be, and I had witnessed the impact sport can create on young children. The choice was easy for me. I had to put my dentistry on hold again and begin my journey to be a full-time coach at ASA. 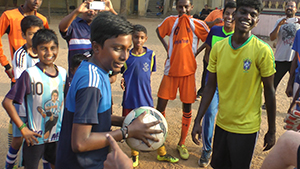 1 year in ASA has made my belief stronger, mainly due to my experience here. I had a group of boys that were small in their built as compared to the others in their age groups and thus shy to play football against bigger boys. But, as days progressed and through various sessions of football and coaching the kids started to believe in themselves, one of the smallest kids in the team, V. Mahendra, scored a goal against another team from the U15 category in the Anantapur Football League helping us win the tie by 1 goal. That was a satisfying moment for me to see how sport boosted the confidence of Mahendra and many young children alike.

There was another boy, U.Rohit, who didn’t like school because it was too tough and didn’t like assignments. I let him play a couple of football matches, made him the main player and even the captain for one game and asked him to try his best in studying, the next day I see him sitting under the tree in the afternoon completing his assignments. These are the little things that we as adults might miss. But for the child, it is important! That very process of playing sport, learning values from it and implanting it in their lives and redoing the whole process again with an able coach is what works best!

Back home, in Chennai, I have seen children who were affected by alcoholism, who face discrimination due to their caste, children from marginalized and impoverished backgrounds forget what they were going through when they play football. The ball does not discriminate.

I believe that good coaching will make sure they learn to deal with it correctly under the right guidance and inputs.

The sports culture that I have experienced in ASA has been incredible with the participation of numerous villages around the district in different sports, I recommend more people could come by from across India and learn to recreate the magic and power of sport that is being done here.

Now moving back to Chennai, I can say I have had no regrets putting my education on hold to pursue my passion for coaching football to young kids in Anantapur. I only wish society was more receptive towards the concept of easing time on education so that more people willingly choose to change the world for better if they could.

Now the time has come for me to head back to dentistry and strengthen my foothold, to finish the unfinished. But one thing for sure is I will forever be a part of the process of empowering lives through sport and the beautiful game of football. 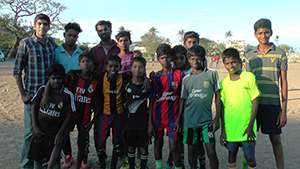