THE ICON AND THE PRINCE charity fund raising dinner for the Duncan Edwards Peace Pitch. 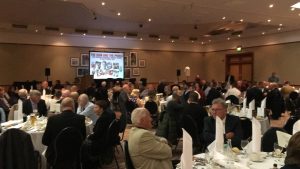 A unique Duncan Edwards Peace Field Plaque will be unveiled at the Dell Stadium in Brierley Hill, Dudley on Thursday, 11 November 2021 when the site will be twinned with the Peace Pitch, Flanders Peace Field in Mesen, Belgium. A fund raising dinner, The Icon and the Prince, was attended by football greats: Alex Stepney, Dennis Mortimer, Graham Williams, Derek Spence and Jimmy Rimmer.  Masters of ceremonies, Jim Cadman and John Homer, presented a memorable evening which was supported by an outstanding exhibition of The Prince; George Best collection of memoriblia and artifacts. Paul Cooper, NCFA Director, said, ‘It was a great evening which will benefit many children. It was a credit to the organisers and everyone that supported the fund raising’. 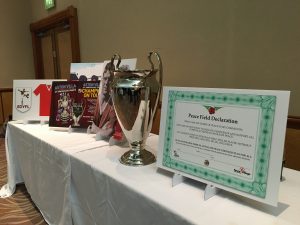 The Icon; Duncan Edwards was a Manchester United legend and in his home town of Dudley, the peace pitch will bridge the generation gap through play.

Matt Busby once said: “Every football manager goes through his life hoping and
praying that he will find just one great player. I was more lucky than most – I found
two – Duncan Edwards and George Best.”

Both Duncan and George joined Manchester United straight from school and
were under the tutelage of Sir Matt during their formative years.

Duncan was selected for the United first team when he was only 16 and
George made his debut at the age of 17.

All profits raised at tonight the dinner will support a partnership formed
with the Stourbridge & District Youth Football League representing Duncan
Edwards and three other Peace Field projects – George Best (Belfast), Denis Law
(Aberdeen) and Sir Tom Finney (Preston) – who will take part in a Peace Field
Tournament at the Dell Stadium in May 2021. 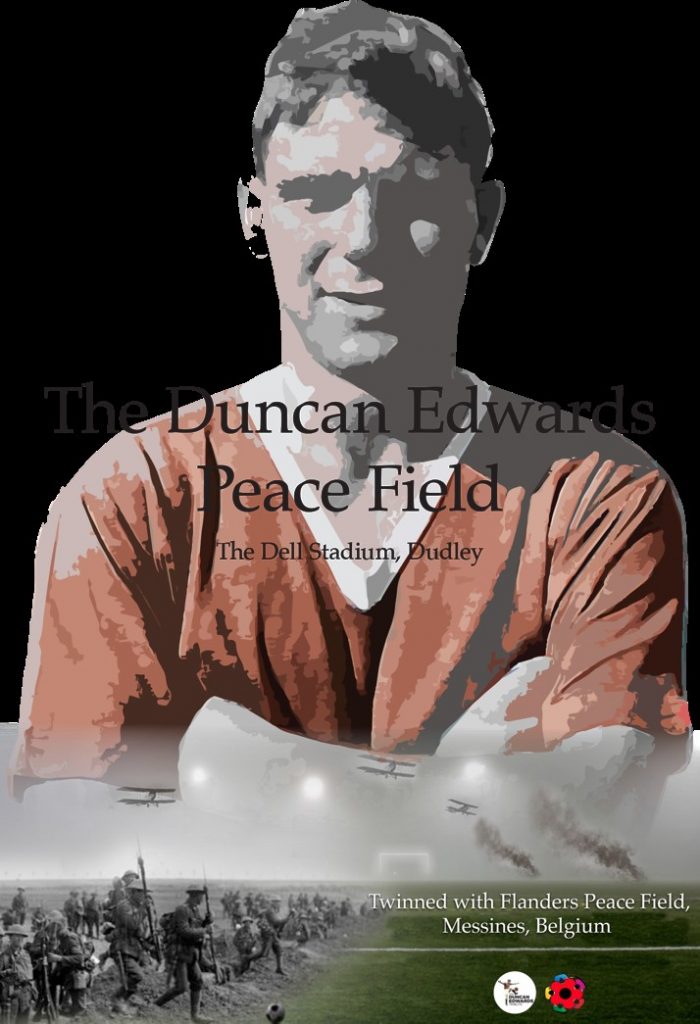 DUNCAN EDWARDS TO BE HONOURED WITH PEACE FIELD SITE

A unique Duncan Edwards Peace Field Plaque is to be unveiled at the Dell Stadium in Brierley Hill, Dudley on Thursday, 11 November 2021 when the site will be twinned with designated areas of play at the Flanders Peace Field in Mesen, Belgium.

Private Sidney Edwards, uncle of the former Manchester United and England legend, served in the 9th Worcester Battalion during World War One and was killed in 1917 in Kut al-Amara, Mesopotamia, now part of Iraq. He is remembered on the Dudley World War One Memorial.

As part of an initiative by the National Children’s Football Alliance, there are 39 peace pitches across five continents in countries including the USA, Argentina, Ghana, Israel and Australia.

Here in the UK, a ­partnership has been formed with three other Peace Field projects – George Best (Belfast), Denis Law (Aberdeen) and Sir Tom Finney (Preston) – and football teams representing each will play in a Peace Field Tournament at the Dell Stadium every year.

Winners of the inaugural tournament to be held in May 2022 will receive the Duncan Edwards Trophy, based on the maquette of the statue in Dudley town centre which has recently been renovated by the sculptor James Butler MBE RA in support of this project.

Ernie Brennan, chief executive of the National Children’s Football Alliance, said: “Young people will connect with Duncan’s legacy and the power of the game that brings us together celebrating peace through play.”

All profits from the annual Duncan Edwards Tribute Dinner, which will be held at the Copthorne Hotel in Dudley on Thursday, September 30 will go to the Peace Field Project.

The theme of the dinner this year will be ‘The Icon and The Prince’ and the event will mark what would have been the 85th birthday of Edwards and George Best’s 75th birthday.

Among the guests are Alex Stepney, a team-mate of Best’s at Manchester United and West Bromwich Albion’s FA Cup winning captain Graham Williams who played against Best and Edwards.

A large collection of George Best memorabilia will be on display relating to Best’s glittering football career as well as his impact on the Swinging Sixties football scene.

The Mayor of Dudley, Councillor Anne Millward, said: “The Duncan Edwards Peace Field is a wonderful initiative and a sobering reminder to us all of the sacrifices made for our freedoms.

“The fact that for a few brief hours, two adversaries laid down their arms and came together to share a game of football is so poignant and I am very proud that the Dell Stadium in Dudley Borough will be twinned with the historic Flanders Peace Field in Mesen, Belgium.”

For more information and to book tickets for the Dinner, contact Jim Cadman of the Duncan Edwards and Bestie75 Tributes on 07971 624627 or email jwc@duncanedwardstribute.com

The Duncan Edwards Tribute actively engages with local communities to celebrate the contribution Edwards has made to the cultural and sporting heritage of the Black Country and to the history of English football. http://duncanedwardstribute.com

Working tirelessly to improve children’s lives, the National Children’s Football Alliance’s aims include creating playing environments and formats which allow children to reach their full potential in football, eliminating factors which cause boys and girls to drop out of the sport and protecting childhood through football for fun.

For more details, call Jim Cadman on 07971 624627 or email jwc@duncanedwardstribute.com