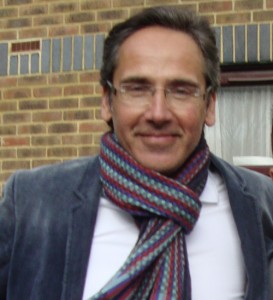 Next year at Christmas, the very evening of 1914 we call the Christmas Truce or in German “der Weihnachtsfriede” will have its 100th anniversary. What does that mean to me as a German, born in the divided city of Berlin? What does it generally mean in Germany?

When I was asked by NCFA to contribute to the Football & Peace Newsletter Special with insights on the German perspective I said spontaneously – yes, of course, hasn’t that been done yet?

As the General Manager of the private non-profit foundation Kick into Life in Munich I work with kids, schools and organizations using football as developmental tool nearly every day. I would say I have become a part of the scene in Germany. Nevertheless it was only a couple of weeks ago at a Swiss conference hosted by Football is More, when I listened to the touching speech given by Ernie Brennan, Director of NCFA.  I realised 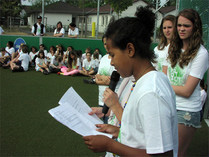 just how strong my work is connected to the history of my homeland.

I think it is very likely that the usage of football as a developmental tool started in the early 1990’s in the favelas of the mega cities of Latin America. Social workers introduced football as a methodology to negotiate rules for a peaceful co-existence among youth gangs which were fighting and killing each other on the streets. Only a little later first and informal street football projects started in Germany with the view to integrate children and youth from migrant and refugee families. Under the name “Streetfootball for Tolerance” a researched methodology was introduced in the years 2000/2001. First federal states integrated the new approach into governmental sports and integration curricula. Since then the methodology set has been continuously further developed into a holistic education platform and is now widely spread over the country. Multiple regional institutions have entered the scene, a nationwide network has been formed organizing a Streetfootball Youth Festival once a year, worldwide exchanges and events grow.

Looking forward I would like to draw the attention to the fact that with the success of the streetfootball movement new challenges occur. Perhaps some will not share this observation with me, but to my perception one of our forthcoming challenges in Germany will be to keep the portion of disobedience from the early beginnings. We have to avoid to become part of the conventional systems which tend to be static or may create new deprivation and divide.

Keeping the memory alive of the very wonder of the Christmas Eve in 2014 may help us to remember that even the strongest form of divide can be overcome by a game like football. Which, in the context of peace, is a very particular responsibility to us Germans.  It is hoped that we can generate Football & Peace events for young people here in Germany and twin those events with the great work undertaken by NCFA in Britain and Ireland.

Notes about the Author:
Clifton Rajesh Grover, born and brought up in Berlin, today lives with his family in Munich. Clifton is General Manager of the Kick into Life Foundation. Prior to this he co-founded and managed the German entity of the Magic Bus India Foundation. Clifton is on the Advisory Board of the non-profit organization YFC Rurka Kalan, Punjab, India. As CEO of the Munich non-profit association Kick For Tolerance, he is in the process of initiating a Pan-Punjab football-for-tolerance project with the two NGOs Sudhaar (Lahore) and YFC Rurka Kalan.