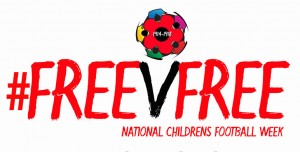 This month children from many different backgrounds and walks of life from the UK, India, Uganda and Chile will be playing football for fun. What they all have in common and what unites them is they will be playing for free.

Here in the UK it is becoming increasingly more expensive to take part in organised football and other sports because of rising costs. In some areas the price of pitches has gone up two or three times so clubs have no choice but to jack up yearly subscription charges and put the ability to pay beyond the pockets of many families. Even then the product is not always very child friendly and often has a strong adult agenda.

Play is the life blood of all children, it is their oxygen and crucial for their wellbeing and development. 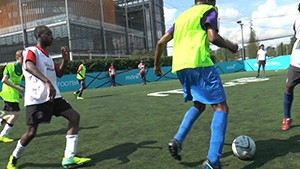 Football is such a simply game and that is why it is popular worldwide in rich and poor countries alike. All you need is a ball, some players, a bit of space to play in and something for goals. But somehow that very simple concept has had many hurdles placed in front of it. Whether it is health and safety fears stopping football in the school playground, the cost of annual fees in organised football, the increase in traffic making street football dangerous and the actual or perceived stranger danger – letting children go off and play their own games.

The theme this year is Football & Peace during the centenary year of the most important football game ever played during the Christmas truces in 1914 when despite butchering each other only hours before, given the opportunity reverted to childhood and played a game of football that they played as children, two teams, jackets for goalposts and a ball. The same game that is played worldwide by children in the playgrounds, streets, parks and waste ground. Checkout the Peace Fields Project and get your school or club involved.

The Children’s Football Week is a great opportunity to give something back and help give some kids the chance to play and have fun. You can do it anywhere – in the garden with brothers and sisters, down the park with some friends, a school event or a special free of charge event at a local club.

What can you do to help?

“One of the major reasons children play football is for the human movement experience, the excitement and indescribable feeling that comes with it.”