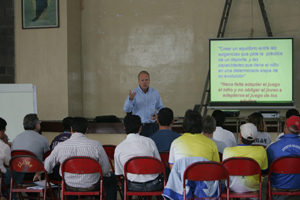 Horst Wein (HW), a German university lecturer with coaching assignments in 51 countries, has always been convinced that one way of promoting the game of football and persuading more youngsters to take up the sport is, to make the practise of football more enjoyable, attractive and from the learning point of view more effective! NCFA’s Paul Cooper (PC) talks to the man that operates on the cusp of football’s ever dividing legions.

PC. Your book Developing Youth Soccer Players was a revelation in both grassroots and the professional game, what was your inspiration for writing the book?

HW. In most parts of the world, as still happens today in the majority of FIFA ,member countries, young children are exposed to the adult game what obstructs their natural development. My idea was introducing and diffusing in the late 70’s age-orientated football competitions and training methods to help young people to unlock and develop their full potential to the most introducing them first to 3vs3 on 4 goals , then with 10 years to 5-a-side football , from 11 and 12 years to 7-a-side football and finally for one year with 13 years of age to 8-a-side football in between the penalty areas of the full pitch on 7-a-side football goals placed on thee 16.50m. Once a proved it with tremendous success in field hockey, I applied the same philosophy for football.

PC. How much do we miss street football, the breeding ground for so many talented players in the past?

HW. FUNino is considered the renaissance of street football. It’s even more attractive and effective from the learning point of view than street football. Today the kids are lacking the ability to create their own games and mainly play more or less the same game without any variation. FUNino played on 4 goals allows young football player to receive much more stimuli than in the traditional street football, considering that there are 26 different games which have another 30 different variations.

PC. In your view was Rinus Michels correct when he said that the best coaches take the core values of street football as their coaching philosophy for children.

HW. I agree with Rinus Michel who asked the best youth coaches to rely on the values of street football in which the game has been the teacher and not the coach. The coach only guides the young player and help the kids to discover the real magic of the game through questioning from time to time to make them aware of things they have not been aware without him.

PC. The Spanish FA have used your book as their coaching manual for children, have other FA’s followed suit?

PC. Children have very little say when it comes to organised football – is this a problem for their social and football development?

HW. This depends completely on the coaches. Once they change their coaching style and employ guided discovery with open and closed questions to make the young players aware of the many problems in the game our training becomes player-centred and game-orientated

PC. You champion a 3v3 format for children’s football – what are the benefits over other formats such as 4v4, 5v5 and 7v7?

*The two wide goals at each end encourage young players to use the wings in attack and open up the play.

*Playing with 2 goals stimulates greater reading and understanding of the game, including peripheral vision, perception and decision making skills before executing any actions.

*Stimulates, more than any other traditional football game, intelligence, perception, imagination and creativity.

*Sufficient space and time allows children to read the game and play constructive football and to develop basic communication skills.

*Due to the fact that the same basic game situations appear again and again (i.e. the 2v1 situation) the young players learn very quickly.

*In FUNino, 8 and 9 year olds enjoy more touches on the ball, treating it as their best friend. No long clearances or wild and dangerous kicks can be seen in which players “violate the ball”.

*Players attack and defend in a triangular formation for better communication and collaboration. Positioning in the field is easy.

*Allows an allround development of all participants as there are no fixed positions in a team which would avoid too early specialization. Everybody has to attack as well as to defend, using the whole pitch.

*Usually there are lots of goals and goalmouth action.

*Each player scores more than one goal per game.

*All the players get to experience a starring role in this dynamic game.

*All 3 players, including the weaker ones, play a critical role in this game and are involved mentally and physically throughout the game. Nobody can hide!

PC. At what age do you think children should be playing the full 11v11 game?

HW. Only after having enjoyed playing competitions up to their mental and physical capacities like Funino, 5-a-side,7-a-side and 8-a-side Football young players can be approached to the difficulty and complexity of the full side football game. At his stage they have the communication and cooperation skills together with the technical ability and the football knowledge to play the 11 versus 11.

PC. In your experience how territorial is the professional football fraternity when sharing children’s best coaching practice?

HW. Obviously the professional football fraternity invests a lot of time and money in their youth development programmes and are thus unlikely to share their expertise openly in a competitive environment.

We, at The Beautiful Game, believe that our proven youth development model can achieve a number of important goals at the same time:

a. All children get to enjoy the game of football as children (and not as mini-adults) as the game(s) are tailored to their needs.

b. Children have the opportunity to reach their full potential, whatever that is, through an optimal development model, including a player-centred approach, that is games-oriented (rather than drills) and a guided discovery coaching style (rather than the traditional instruction style).

c. As the model is more inclusive and fair than the traditional elitist model, there are many social and character/lifestyle benefits emanating from this approach.

For more information about FUNino and the Beautiful Game: blog.thebeautifulgame.ie