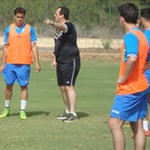 Juan Pedro is the Head Coach at La Manga Club a high performance football centre which is designed to give talented young footballers aged over 18 the possibility to be seen by professional football clubs,  to be coached by professional, qualified and experienced football coaches, and take part in specifically designed residential football programmes running throughout the year.  Whether the player has been released by a club, lives overseas and needs access to trials, or is good enough and has never had the chance to prove it to the right people, then La Manga Club High Performance Football Centre is the right place.

Q. Please provide a brief introduction to the work you do at La Manga Club?

JP. After many years working as Team Manager for professional football teams (Spain, Finland, Canada, UAE, Japan, Morocco, Tunisia, Qatar) I was also responsible for coach education in many of the countries.  I advise many football associations in terms of application, direction and players development.

I am a UEFA Pro license coach with 20 years experience developing professional players and coaches.

Q. How did you end up at the La Manga Club?

After many years around the world I ended up at La Manga Club to help create the High Performance Football Centre.  The beautiful location lends itself to clubs, teams and players to focus on their strengths and perform to their optimum level without the rigours of outside distractions. 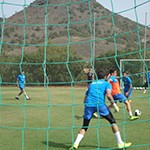 La Manga High Performance Football Centre is a major hub in the world of professional football.  However, we have many football clubs and teams from across the world that play at many different levels visit the centre and gain from the experience.

We have approximately than 200 professional teams and 100 amateurs teams, also about 500 scouts, visit La Manga Club every year.

Q. Why do you feel it is important to have a Peace Field at the La Manga Club?

I think the Peace Field Project is a wonderful tribute and commemoration to the First World War and the 1914 Christmas Truces.  The world of football needs to be reminded that football ultimately makes millions of people, young and old, very happy.  In the current economic climate here in Spain needs a Peace Fields Project to remind ourselves that Spain was viewed by many countries at the time of the First World War as peacemakers. Spain was considered one of the most important neutral countries in Europe by 1915.

Many of the young footballers from around the world that visit La Mange may be considered the best for the age in their sport in their communities.  Playing on a Peace Field at the La Manga Club will remind them that football is a game that unites people it does not divide people.

It will be a field that will have games played on it in the spirit of the Christmas Truces.  It will promoted sportsmanship, friendship, social inclusion and it will support peace makers through football.

Q. Who will benefit from playing on the Peace Field? 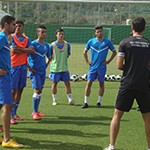 Everyone that plays on the Peace Field will benefit.  We intend to provide information about why it is called the Peace Field.  Through the National Children’s Football Alliance UK and the members of the International Children’s Football Alliance we aim to create links with the Peace Village, Messines, Belgium.  We hope to facilitate the Peace Cup Games which will range from elite to mixed ability and mixed gender participants, young and old.  We also hope to invite local schools as well as school from abroad to come and take part and celebrate peace and commemorate World War One.

I feel it is very important to commemorate 1914 Christmas Truces through football.  Football provided a moment in history that brought war to a stand-still. It is a very powerful force for good.  It young people can learn from that fact and respect their elders then we must provide this peace field for many generations to come.

Q, In your opinion does the football fraternity have a responsibility to promote the Peace Fields Project at all levels of the game?

In my opinion it is vital that the world of football (professional and amateur game) support and promote the Peace Fields Project at all levels of the game.  It is common sense to educate young people that peace is the only way forward and football as a duty to do this for humanity.  The Children’s Football Alliance will have our support and we hope to build on the good work already being done.