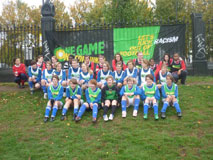 Aims of the Project

Provide football for fun under the banner of Let’s Kick Racism Out of Football campaign.

Children from Islington, London play football with children in Faversham, Kent. The event takes the form of an all-inclusive round robin football tournament. Mixed gender, mixed ability and mixed ethnicity children play in a loosely supervised tournament refereed by children. On the day of the event information concerning racism in football is provided by Let’s Kick Racism Out of Football’s resources http://www.kickitout.org/ Kent Police provide a low key visible neighbourhood presence which added to the important message and information available to all participants.

Children play football in Islington on concrete playgrounds, in play areas and 3 G pitches (Caledonian Road) in contrast to children playing football in Faversham on concrete playgrounds and playing fields. Playing children’s football in Faversham is considered more accessible and generally more available then children’s football in Islington. Furthermore, the caption area in Islington is culturally diverse than that in Faversham. Children experience different cultures when they travel 53 miles from the capital to the rural market town. For many children it is their first experience of playing football outside of their neighborhood and for many children it is the first time that they have played football in an environment free from adult intrusion.

Arsenal Positive Futures programme utilises the ‘Kick it Out’ event to engage children’s focus on achievement. For children in Faversham it is an opportunity to meet and play football with children from a BME community.

Children in Faversham football clubs were reporting racist incidents taking place in their structured game on and off the pitch.

A small number of matches in 2005 were disrupted by racist comments made by players and parents on the touch line which inspired Ernie Brennan (Faversham Head Coach) and Antony David (Arsenal Positive Futures Head Coach) to utilise Kick It Out resources and organise a children’s Kick Racism out of Football tournament.

Children in Islington were often too afraid to go out of their code area due to the threat of gang violence and being a target. What they do have in common though, is the love of football. That is why we could engage them in a safe environment on their estates. We try to introduce healthy living, confidence, football development with enjoyment and good communication skills with others so it develops into a long term process rather than a short term football activity.

Children did not have any experience playing football with children outside of their community.

The importance of a cross cultural exchange was a solution which could help address long term issues of racism. Using football as the common ground and taking the children out of their familiar environments and placing them with children of similar age group from different communities formed friendships and memories that would help build their foundations to address racism in the future.

Children’s football is a vehicle to do some good in the community and parents would have the opportunity to help educate their children through the event.

When children play their football they do so without prejudice. The energy, excitement and fun they generate in their game are far more important than race, gender and ability.

Over the years the programme has generally been adapted to meet the needs of the players participating at each event.

All age groups between 9 and 12 feature mixed ability and mixed gender players.

2009 the venue switched to the 3G pitches, Market Road, Islington, London. It was the first time the event facilitated under 15s girls.

2006, 2007, 2008. Kent Police sponsored the event and provided a community presence with Police Community Support Officers distributing information about racism and how to report it.

2008, 2010. Tesco in the community provided healthy option buffet for all participants.

Every player plays. There are no subs. Every child gets lots of touches of the ball and plays in lots of different positions. Children referee the games themselves.

The tournament ends with every child receiving a medal and Kick It Out badges, stickers, programmes, etc.

There is a presentation at the end of the tournament where children are awarded Most Sporting Team, Runners Up and Champion trophies.

The event finishes with a reception and healthy options buffet for all the children and players.

The annual event works on many levels. Ultimately, children experience different cultures whilst playing their football for fun. The issues of racism are not overt however the exercise recognises the benefits of employing football as a vehicle to bring diverse communities together. Children, parents and carers value the Kick It Out environment and continue to share vital recognition that there is no room for compliancy in children’s football.