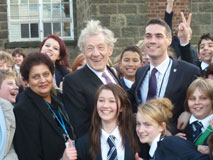 ‘You just don’t really hear people saying things like ‘that’s so gay’ at our school anymore. People stop and think about the words they are using now’. Megan, 15, is a speaking at a meeting of the Student Diversity Forum at Prince Henry’s Grammar School, Otley, where one year earlier members of the group had highlighted the commonplace use of homophobic language as an area which the school should address if it was serious about tackling all forms of discrimination and promoting equality for all.

Assistant Headteacher Chris Lillington picks up the story. ‘It was students themselves who told us that whilst racist language was very rarely heard in school, the use of the word ‘gay’ in a negative context was common currency. Members of our Student Diversity Forum then carried out their own survey of the wider school community, which reiterated this.’

Teachers form the school’s Staff Diversity Group were clear that there was only one thing to be done ‘ act upon the mandate which students had given them and address homophobia, intentional or otherwise, head on. The first step was the introduction of a ‘zero tolerance’ approach to homophobic language at Prince Henry’s which, despite its historic name is a large 11-18 comprehensive school in West Yorkshire. A special staff training session addressed the theme of homophobic bullying, and many staff were shocked at statistics from Stonewall’s ‘Teachers’ Report’ , such as the fact that half of secondary school teachers nationally who are aware of homophobic bullying in their schools say the vast majority of incidents go unreported.

Staff and students then worked together to raise the profile of homophobic bullying, including assemblies for all year groups, a special citizenship day which included lessons based on Stonewall’s educational DVD and feature film ‘Fit’ , and a performance by the Caboodle Arts Company of their anti-homophobia play ‘Boxed In’ .

At the same time the school was preparing a week-long Diversity Festival as a culmination of the year’s focus on equality and diversity issues, and its work towards the Stephen Lawrence Education Standard , an award scheme for schools which embed race equality and community cohesion within all aspects of the life and work of the school. Under the banner ‘Same Difference!’ a range of activities was planned to address different aspects of diversity, including ethnicity and culture, faith and disability, and the decision was made to adopt the Stonewall campaign ‘Some people are gay. Get over it!’ throughout the week to make the link between homophobia and the wider equalities agenda.

When Prince Henry’s students arrived at school on Monday morning they were left in no doubt as to the theme of the week. With every classroom and corridor in school displaying posters and bunting, and every member of staff wearing a t-shirt or a sticker bearing the slogan, there was no way of getting away from the message. ‘The fact that every member of staff showed their support by wearing a t-shirt or sticker meant that there really was no place for any negative backlash ‘ nowhere to go for anyone to express homophobic attitudes. Quite simply, respect for diversity in terms of sexuality was so ‘in your face’ that students could not help but be challenged about any negative views they may have had. For students to see every adult in school being comfortable showing off this slogan (including the ‘macho’ football and rugby-playing PE teachers!), gave a very powerful message ‘ ‘If WE haven’t got a problem with people being gay, why should you?’’

In fact, the PE department were eager to spearhead the anti-homophobia focus, and invited Lou Englefield of Pride Sports to come in and run workshops for students on homophobia and gender stereotyping specifically in sport. Lou asked students to name famous gay people from the world of music and entertainment, which produced a predictably lengthy list. When she posed the same question, but this time with reference to the world of sport, it did not take long for students to see the point that was being made. The workshops were followed by ‘mixed games’, including boys and girls playing netball together.

‘Of course, it’s not all about banners and slogans’, adds Chris Lillington. ‘What really makes a difference is what goes on the classroom day in, day out, lesson by lesson. It’s about the classroom-based work which positively portrays gay, lesbian and bisexual athletes, authors, musicians, artists. It’s about our displays, our whole-school stance on homophobic language. It’s about mainstreaming the existence and ‘normality’ of gay people in the eyes of our pupils. Most of all, it’s about creating an ethos where our young people feel safe and able to be themselves’.

Back at the Student Diversity Forum meeting one year on the members of the group are reflecting on the recent visit to the school by Sir Ian McKellen, who praised the school community for its achievements in promoting diversity and combating homophobia. When asked whether the school needed to do more work on homophobia the group was unanimous: ‘We should always remind people that homophobia is wrong, but we also need to look at other areas this year, like how some people are called ‘chav’ just because of where they live’. The students have spoken, and staff are now drawing upon the progress in tackling homophobia to help them address discrimination related to socio-economic differences in the same way.

Chris Lillington is convinced that it is this approach to equality which has been so successful: ‘By looking at sexuality or socio-economic differences as part of our wider focus on equality, it is very easy for our students to see the parallels with other forms of discrimination and to start to peel away the prejudices: if they agree that racism is wrong and comments about people with disabilities are unacceptable, why should it be OK to treat someone differently because if their socio-economic background or sexuality?’.