The Don’t X The Line Campaign is working with The Professional Footballers Association, The Football Association, The Professional Game Match Officials (PGMOL), The Football Association of Ireland and other professional bodies to help raise awareness and eliminate problems experienced by referees at all levels of the game of football, in particular at grass roots level. The reFspect awareness weekend is an initiative aimed at improving the behaviour of parents and spectators. By reducing the number of incidents of poor touchline behaviour we aim to maintain the current number of referees and help to attract many more new referees to the beautiful game. We would like all football clubs to raise awareness of reFspect by signing up to support the weekend.

The Don’t X The Line ( DXTL) Campaign was established in 2003 by it’s founder Malcolm Lee, to support zero tolerance amongst those people involved in football by refusing to tolerate constant aggression, verbal abuse, bullying and racism on and off the field.  Mal has been commended for his dedication to the DXTL campain and has been recognised for his eorts when he was made the National Award Winner Sir Bobby Moore, Fair Play & Respect by the FA.

Don’t X The Line Campaign is credited as the forerunner for the FA’s, Respect Programme; we are a CIC and voluntary organisation. We are very proud of its achievements to date. Also, we will continue to make a difference at grassroots level by relying on the ongoing work carried out by our many volunteers.

Last year, Professional Clubs supported the Don’t X the Line and helped with the awareness of the ‘Respect the Referee’. This included promoting the message over the public address system, advertising it on club websites and a mention in the match day programme.  Some Clubs further responded by providing their logo. Also, some managers participated by wearing a lapel badge in support of the awareness weekend. 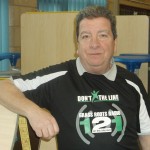 Many thanks for your continued support. Further contact for interviews and photo opportunities are as follows: Mal Lee (Founder Don’t X The Line Campaign): AVAILABLE FOR INTERVIEW    07951442480 Website: http://www.dontxtheline.com/ Email: mal@dontxtheline.com