When I first started out organising football for children with special educational needs and disabilities it was really all about those youngsters just having fun, and playing football like a majority of other children could, something which I had done with friends playing in the local park and in the back streets where I lived. 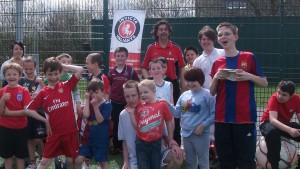 When we first began back in 2004 we only had six youngsters, all aged around eight-years old, turn up for our first session, one of my own children included, and fourteen years on we now have 40 registered players, whose ages range from six-years old to over 20’s, all involved in playing special needs disability football.

Invicta Valiants have four teams, under 11’s, 13’s and 16’s, and an adult team for player’s 16-years plus, a few of whom started out with the club back in 2004. All of these teams now play in the Kent Pan-Disability League, which was formed around 2007, an initiative developed through the Kent FA and a few clubs at the time which organised football for players with special needs and disabilities, and we have just began running a Unified Team in the Special Olympics, where 4 players with learning disabilities play in a team with 3 mainstream players, competing in a Special Olympics regional league.

This has been a huge step forward in the development of disability football, since our clubs humble beginnings, where clubs running disability football at grass roots level were few and far between, which required clubs travelling some 80 miles each way, two or three times a year, to play in the only tournaments run at the time for players with disabilities, which was in Feltham, West London, organised jointly between Chelsea and Brentford football clubs. 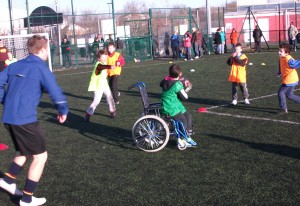 I then came across Give Us Back Our Game, and I began implementing the GUBOG philosophy into disability football, which was to ensure the players (children) were having fun and enjoying their football. Times have changed, and with the FA implementing their own version of Give Us Back Our Game, under the heading Your Kids Your Say, junior football is now being restructured to take into consideration the needs of the players, and although there is going to be more flexibility allowed in games, leagues and tournaments, the competitive element is still kept within the seasonal football activities. However, I’m not going to go into too much detail in regard to the FA’s restructuring of youth football, as you can read all about it on the FA website, my main concern is how the inclusion of players with special needs and disabilities is progressing at grass roots level.

The FA run impairment specific squads, where just recently the Learning Disability Impairment teams have been taken on by the Special Olympics, leaving the FA to run physical disability squads, deaf, cerebral palsy, visually impaired and so on, however at our club we have found that players who have physically disabilities have been dropping out of the game. In the 2010-2011 season 26% of our club players had physical disabilities, by the end of the 2012-2013 season the percentage has dropped to 10%. The reason for this could be that as Kent-Pan Disability tournaments become more competitive than they once were, players with physical disabilities, especially younger players, are finding it more difficult to compete and enjoy the game when they are up against a team dominated by players with learning difficulties who are physically much more agile and stronger.

Ideally teams would be graded on physically abilities, however when you are struggling to even find enough players to make up competing age banded teams, you end up putting any sort of team together just so the players can get on and play a game. On most occasions the players are just happy to do this, however it’s no fun for them when they keep losing games by double figures. 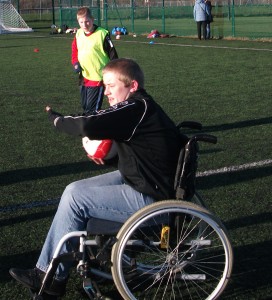 Learning difficulty conditions are not considered a disability, which many of the parents of players at the club who have autism or aspergers will argue fiercely against, however Special Olympics legislation only allows people with a registered learning disability to compete in Special Olympics Sport.

There are now large numbers of players who fall between physical disabilities and learning disabilities, which includes those with autism and aspergers, who can go no further than playing grass roots football, as they can’t progress through the FA impairment pathway, or in the learning disability Special Olympics. At a local level these rules are more relaxed, and a majority of our players will only ever want to play at grassroots level for fun anyway, but if any of these players want to progress, they must fit into either of these disability categories, physical of learning, or try out in mainstream football, which many have attempted and been rejected.

For girls with learning or physical disabilities it’s even harder to be included in playing, as at present there are age restriction for girls playing mixed team football, so once the girl player reaches 13, unless they can join an all girl team, any participation in FA or Special Olympics administered football comes to an end, however the FA recently agreed for mixed football to be extended to under 15’s starting in the 2013-14 season.

National statistics show that there are fewer girls than boys with special educational needs or disabilities, so it is unsurprising that club can’t find enough players to organise all girl disability teams, even to play five-a-side football.

Part of the FA’s club legislation is that clubs running football activities from junior to youth teams should be totally inclusive, where they should try as best as possible to include players with special needs and disabilities, or point those players towards a club which can meet their needs, but this does not happen, that is why we, Invicta Valiants, have over 40 players with varied special needs and disabilities on our register, a majority of whom have come to us through our own publicity promoting the club or by word of mouth.

Professional clubs such as Gillingham and Charlton, run successful disability football squads, and are big enough organisations to access funds and coaches to keep these projects sustainable, although Gillingham were slow of the mark to get their disability football programme up and running, where clubs such as Invicta Valiants need to rely on volunteers, mostly parents of players with special needs and/or disabilities, to administer and organise club affairs and coach the players. To keep the club sustainable they also need to secure funding, grants, donations and sponsorship, which in this current financial climate is becoming increasingly more difficult. 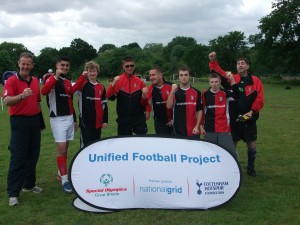 The development of disability football on the whole is left up to clubs such as ours to organise and develop at grass roots level, however once those players become proficient in their football skills, the FA have a pathway where players can progress within the organisations own disability development activities aimed at finding and producing elite players to go forward into the top level of disability football, which is similar pathway into the Special Olympics too. However it is becoming increasingly difficult for independently administered clubs to keep disability football running a grass roots level, this season our club had to pay out over £400 for players and coaches insurance alone.

Even if players paid subs the income would never be enough to cover the costs needed to organise and run disability football activities, pay for affiliation to the FA, costs for travel to take players to tournaments, seasonal fees for pitch usage for training, and the costs involved to keep coaches qualified to coach in children’s football. A majority of the club committee have been giving up more time than they should in keeping the club running, which is no doubt the same scenario at many other grassroots disability clubs, where playing any form of football is reliant on funds available and the dedicated force of volunteers, administering the club activities and coaching the players, all of whom are only there for the benefit of the players.

The ideal solution would be for all junior and youth clubs to give youngsters with special needs and disabilities the same opportunities to play football as mainstream players, but this is a difficult objective to achieve, mainly because clubs do not have the coaches who have experience and the knowledge of working with players with special needs and disabilities, and although the FA run disability coaching workshops unless you actually work with these players junior football coaches will never be able to give them a positive football experience from just taking FA disability coaching workshop courses, you need to be out there doing it to get experience. Personally I have my doubts on how many clubs want to run teams for players with special needs and disabilities, if they did then there would be more mainstream clubs offering football activities for players with disabilities.

One club similar to ours linked up with Maidstone United, and now have a successful partnership in running disability squads alongside mainstream squads. However not all mainstream clubs seem to be so pro-active. Invicta Valiants have been attempting a similar link up with a local mainstream club operating out of Ashford, which would only need the mainstream club to oversee the administration side, as we could then dispense with having a club committee, child welfare officer, chairperson etc, as these posts would already be in place at a parent club. If grass roots disability clubs are to continue, the football governing body must be more pro-active in promoting links between disability teams and the larger local junior/youth football mainstream clubs in the same area.

For clubs such as those mentioned previously, Gillingham and Charlton, they have the infrastructure to carry on the development of disability football, on Match of the Day Saturday 16th March, the programme featured Manchester United’s disability teams and disability football programme, and very impressive it was too, however unless smaller clubs such as ours, Invicta Valiants, can get some support from a local mainstream club, then it is likely that there will be less players with special needs and disabilities playing football for fun or competitively.

For myself I now concentrate on organising fun football activities and projects for youngsters who only just want to play for the fun and enjoyment of it, if some go on to play football at the Kent-Pan Disability League with Invicta Valiants, or another disability grass roots clubs, then all well and good, and if others progress to play in disability impairments teams with the FA or Special Olympics, that would be fantastic achievement too. However there are hundreds more who will only ever want to play football for fun, and if clubs like ours are not sustainable, through lack of funds, lack of support from football governing bodies at county and national level, lack of coaches who understand the players needs, and more importantly lack of support from local mainstream clubs, then what does the future hold for disability football inclusion at grass roots level?

If you feel strongly about the issues raised in David’s article please contact: