“Pass it to Muller” one lad shouted to a team mate and a series of passes saw the youngest of the team despatch the ball into the net pass the despairing dive of the keeper. The scorer was wearing a Germany World Cup football shirt with Muller on the back. His team mates had spent the last five minutes of the game setting him up with a number of chances before he scored his goal and round down the pitch beaming with his teammates ruffling his hair, patting him on the head and congratulating him. This is typical of how children play when left to their own devices and the older players looking after the younger ones and everyone learning and playing together. 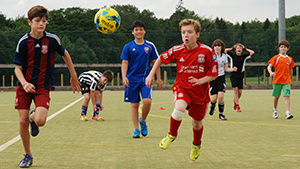 The 5th Summer off the Streets was a great success with nearly 50 children present, boys and girls aged from 5 to 13.

Choosing teams we ask the children to pair up with a friend and then join them with another pair of friends and you have a team. They number themselves 1-4 and when we shout that persons number it is their turn to go in goal. 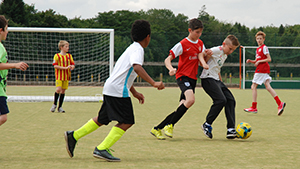 The only other stipulation is that it is 10 minutes games, round robin. How the games kick off, how they play the ball onto the pitch (a throw or dribble or kick) if the keepers can kick from hand or just throw the ball, the pass back rule, whether they have centres or kick offs is purely down to the children and they sort it as they go along, with the minimum of fuss, no quibbling, just getting on with the game.

We never bother giving out bibs and the kids never ask us. Just fun, play and football from 10.30 in the morning until 2.30 in the afternoon with 30 minutes lunch break.

At the end we asked each team which team they enjoyed playing against the most. When they selected the team we asked that team to pick the most sporting and fun team mate. That was the only award.

When given the right environment children revert directly to play and having fun.

“The World Cup (in 1966) was not won on the playing fields of England, it was won on the streets. 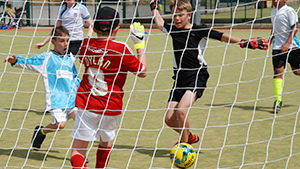