T-shirts, Racism and the People’s Lawyer 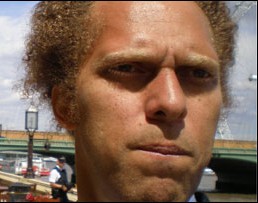 David Neita was called to the Bar of England & Wales in 2000, Dave was a member of the legal team, which brought the largest group action claim in the UK on behalf of thousands of South African asbestos miners. Dave has also represented many youngsters excluded from school and he the last lawyer to Milton Hanson (deceased), the outspoken Nurse who confronted and fought against racism in the NHS.

Although his work as a barrister and poetry takes up much of his time Dave also volunteers his time in the community and the Mayor of London has highlighted him for making an outstanding contribution to life in London. Dave also runs a project that employs poetry as a vehicle for expression for users and carers within mental health services. This project also assists users to draft parliamentary questions to the executive of the government, which expresses their political concerns. He has been featured in MENTAL HEALTH TODAY for his work in Creative Psychiatric Care.

“It seems like the authorities don’t have the stomach to take this on, and if the players don’t take it on then nobody will.”

Is Jason representative of a subliminal voice?

(DN). He has certainly turned up the volume on the outrage against racism in football. A parade of players wearing campaign t-shirts is not enough to tackle racism in football and ironically it can have the unintended effect of stifling the voice of protest against racism in the sport. The t-shirt gesture, although surely well meaning, not only promotes a muffled voice, it silences the urgent demand for racist-free football. When spectators observes what can only be described as ‘pay-as-you-go racism’ in football, with offenders penalised with meaningless percentages of their annual wages and ‘slap-on-the-wrist’ match bans, they must conclude that racism in the sport is frowned upon but not so serious. This position is unacceptable and yes there is a subliminal voice of disgust and indignation at racism in football and Jason is giving audio to that voice and visibility to the vision of an uncompromised untarnished sport.

In your opinion, knowledge and experience what is Jason achieving?

(DN). He is bringing attention to the issues around the ugliness of racism in football and society.

Is there room to challenge Kick It Out and the domain they now occupy, funded by the Football Foundation who in-turn are funded by the Prem League and FA?

(DN).There is always room to challenge organisations and Kick It Out should welcome the opportunity for challenge and accountability. It may just be the wake up call we all need to think about the problem in different ways and to apply creativity and diversity of approaches to solution-focused activism.

Is racism in football an adult issue or is it a baton destined to be passed onto children and young people?

(DN). It is an issue affecting virtually everyone in society. There is no greater sport on the planet than football and the criminality of racial abuse in the sport has turned football arenas into the largest and most prolific crime scenes in Europe. However, the investment, at the moment, in prevention, investigation, detection, prosecution, admonition, castigation, rehabilitation and reintegration is woefully inadequate to halt the spread of this disease to the next generation. Consequently, we must act now to irradiate racism; there is an urgency that cannot be overstated!

When the Sheffield Wednesday goalkeeper was physically assaulted by a Leeds United fan, the goalie was given treatment and recovered to continue playing the match and his physical bruising will thankfully heal within a reasonably short time. The assault took place on Friday and the urgency for action meant that justice did not take a weekend break. By Monday the thug was detected, prosecuted and imprisoned. The Leeds manager commented that the assailant’s action spoiled everything for everybody and should be sent to jail.

What about the racist assailants in football, the ones on the pitch, the ones in the stands, the ones in the boardrooms? Is there enough of an urgency to deal with racial assaults? A knife will be confiscated and the carrier arrested but armies of racist thugs are walking into stadiums with an arsenal of racially insulting paraphernalia, from bananas for throw at Black players to racist banners for waving and taunting. This cannot continue!

It is a great thing that physical injuries sustained on sporting grounds tend to heal over time; it is unfortunate that the emotional injuries sustained by racism in sport tend to deepen, embitter and dishearten over time. When I hear footballers tell their stories of racist abuse that took place decades ago, the misery and melancholy associated with their experiences is so palpable it sometimes feels like it happened only yesterday. It is a shame and indeed a stain on the sport that it is still happening today.

We must assert our right to ligitimise protest against racism in all forms and in all spheres. In so doing we discover that to wear or not to wear is not the question? The question is really, are we eroding the racism in society such that it buckles and crumbles in on itself, never to rise again?

The impact on children is immeasurable when racism is acted out in football. As a child I remember Leicester City’s Larry May (great player 1970s) scoring a bullet header from a corner kick and witnessing the whole of pen four in the kop monkey chant him. I was 9 standing with my Jamican mate who was 8. We were kids. The last professional game I attended years ago I was sitting with my British Asian mates listening to the opposition fans sing with venom, “I would rather be a **** than a ****”. It made my stomach turn – I felt sick. My 9 year old son was sitting next to my Asian mate’s 9 year old son. A whole 30 odd years between a memory and a fact;

THERE IS NO ROOM FOR COMPLACENCY

Thank you for your time David and all the great work that you do for everyday people, clearly a Sly and the Family Stone fan or is that an Arrested Development fan?

Check out David’s interview on the matter on the BBC: