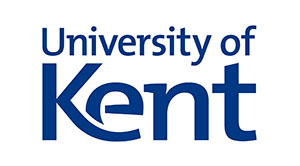 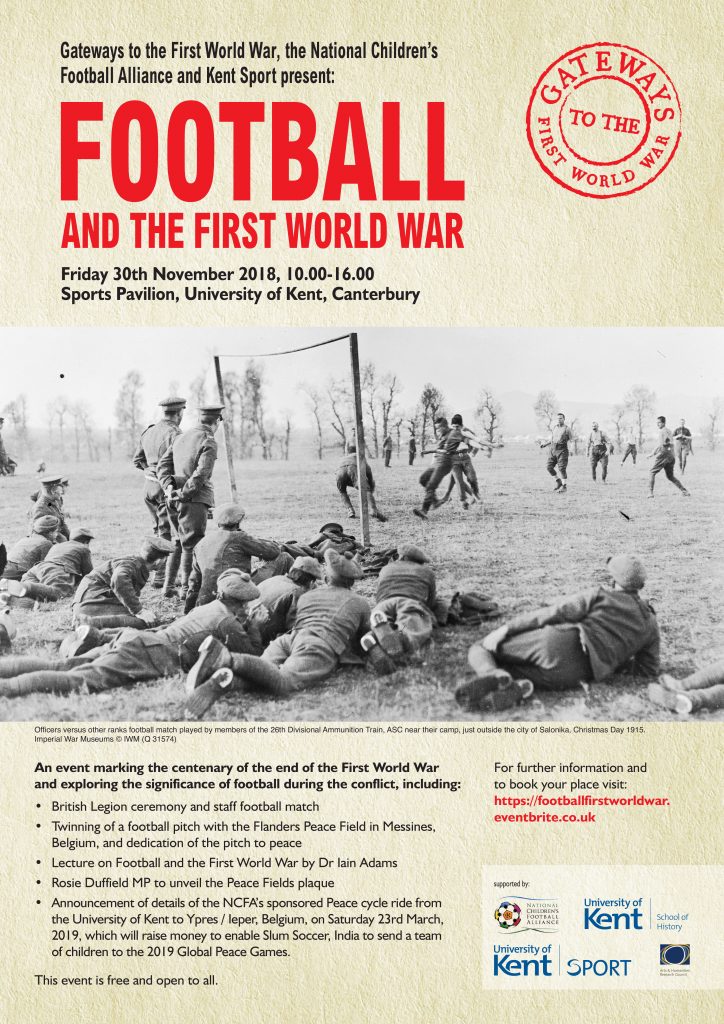 To mark the hundredth anniversary of the end of the First World War, University of Kent staff will play a football match and officially twin a sports pitch with the Flanders Peace Field in Messines, Belgium. The match will be followed by a lecture from leading historian of sport, Dr Iain Adams, who will discuss the significance of football during the conflict and address some of the myths that have grown up around it.

The event is hosted by Gateways to the First World War, the National Children’s Football Alliance (NCFA) and Kent Sport, and the twinning of the football pitch is part of the NCFA’s international Peace Field project. NCFA will also announce details of the sponsored PEACE cycle RIDE from the University of Kent to Ypres/Ieper, Belgium, on Saturday 23rd March, 2019, which will raise money to enable Slum Soccer, India to send a team of children to the 2019 Global Peace Games.

Tickets are available at https://footballfirstworldwar.eventbrite.co.uk.

Representatives from the British Legion will lead a short ceremony at the start of the football match and Canterbury MP Rosie Duffield and the University’s Vice-Chancellor Professor Karen Cox will unveil the Peace Field plaque.

Dr Emma Hanna of Gateways to the First World War, which is funded by the Arts and Humanities Research Council, said ‘as we mark the centenary of the end of the fighting during the Great War we can now move on to examine the processes of peacemaking in the post-war period. Those who fought 1914-18 never wanted subsequent generations to go to war again. Today the use of sport in promoting peace, equality and opportunity among children of all nationalities at the Peace Village in Messines, on the former Western Front battlefields, is a fitting memorial to all the men and women who fought for peace during the Great War.’

Oli Prior, Head of Physical Activities, Kent Sport, University of Kent, said, ‘Kent Sport are honoured to support this project and have one of its sports pitches twinned with the Flanders Peace Field.  The commemorative plaque will serve to remind current and future users of our facilities that sport is a powerful ally for bringing people and powers together in peace and serves as a fitting memorial to those who have been lost in conflict but never forgotten.

Rosie Duffield, MP for Canterbury, said, ‘“I’m thrilled to be taking part in this fantastic event commemorating those who fought in WW1, while celebrating the twinning of the football pitch between the University of Kent, and the Flanders Peace Field in Messines, Belgium. We know that sport plays a huge part in bringing people and communities together, and this project shows just how unifying it can be.”

NCFA chairman Brendan Hanlon said: “More than 10,000 young people have been involved in the Peace Field Project, twinning designated areas of play around the world with Flanders Peace Field, this event will inspire young and old, to play their games on their peace pitch in the spirit of the Christmas truces football games in 1914”

Ernie Brennan, NCFA CEO, added: “There are many monuments commemorating war; the peace pitch not only commemorates war, but celebrates peace. Sport is a brilliant way to bring people from all different backgrounds together.