It has been a while since we caught up with our patron Sue Palmer the distinguished author on child development in the modern world and literary specialist.

We found that Sue has been very busy north of the boarder in Scotland with her latest book Upstart.
Sue please can you tell us about your new book Upstart and the potential movement behind it?

It came out of the research for an update of Toxic Childhood I was working on in 2014.  The more I learn about child development, the more concerned I’ve become about the steady disappearance of play from young children’s lives.

By ‘play’, I mean ‘active, outdoor, social, self-directed play’, the sort of thing children have engaged in for millennia, and which appears to be important for all sorts of developmental ‘must-haves’ (physical, social, emotional and cognitive).  And by ‘young children’, I mean the under-sevens.  Play is important at all ages, but particularly in these early formative years when children are developing their personalities and habits of behaviour.

Yet it’s now almost impossible for parents to ensure enough opportunities for young children to play out so I’ve come to the conclusion that the state will have to step in.  Upstart argues the case for introducing a kindergarten stage for children between three and seven, based on the Nordic model, with an emphasis on all-round development (‘readiness for life’!), including lots of opportunities for outdoor play.

The evidence I found for changing our approach to early education seems to me so overwhelming that I got together with some like-minded friends and, in May last year, we launched a campaign called Upstart Scotland to try and get this sort of change up here north of the border.

How far are we behind the Nordic countries in terms of schooling and the need for early years play?

Our extremely early school starting age means that, culturally, we’re light years behind northern Europe in general, where there’s been a long tradition of kindergarten education.  Parents in the UK countries have been reared to accept that it’s ‘normal’ for children to start school at four or five (in fact, it’s not at all normal — most countries start at six and many of the most educationally successful nations start at seven).  So we simply don’t value play.

We may’ve got away with this in the past, when children were playing out around the edges of the school day, at weekends and in holidays.  But as outdoor play has declined, we can no longer ignore the findings of developmental psychology and neuroscience.  We MUST do something to reinstate this sort of ‘old-fashioned play’ at the heart of early childhood.

Your book Toxic Childhood, as well as your others has caused tremendous debate around the globe. What plans do you have for other books in the future?

Oh please, no more books!  At least not for a while…  Upstart Scotland is keeping me pretty busy and I want to spend some time actually doing something, rather than scribble-scribble-scribbling. 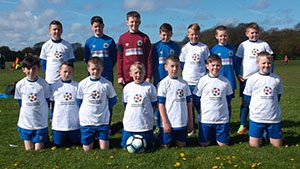 The NCFA are holding their annual National Children’s Football Week (NCFW) in July with the emphasis on PLAY. Do you think adults interfere too much in children’s play?

YES! We have to learn to back off and let children take more responsibility for their own actions and learning. How are they going to develop self-regulation and social skills if we’re constantly jumping in and organising them?  And if they don’t develop self-regulation and social skills, it has a knock-on effect on long-term resilience and intrinsic motivation.

The NCFW is a free event but we are finding that many children are being priced out of sport clubs as their parents just can’t afford it. What are your views on this?

Why should children need sports clubs in order to play?  They just need time, a safe space and the knowledge that there are adults on hand if they’re needed.  That’s how kids have played through the ages.  One of the aims of Upstart is to alert parents to this (to me fairly obvious fact) in the hope that they’ll find ways of reviving this informal approach to play — jumpers on the ground for goal posts, and all that!

Professional football clubs in England are now offering trials for 5 year olds. What your thoughts are on this?

I think it’s absolutely appalling — dreadfully bad for the children.  And, in the long term, totally counter-productive for the football clubs.  Imagine how socially and emotionally stunted the kids will be when they grow up…

Click on the link for more information about UPSTART SCOTLAND