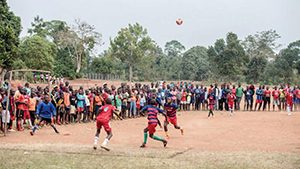 Watoto Wasoka was founded in 2009.

Watoto Wasoka – football made in slums, is a local NGO based in the heart of Kampala’s biggest slums. We are a non‐profit,community – led youth development organization which uses soccer as a vehicle for positive change in the life of slum children in Uganda. The organization aims to promote street and slum kids through their love for football, and tries to provide them with an alternative to street life for a better future perspective. We offer shelter, education and school support.  Upon realization of our first model centre, we intend to include health services & job training for those, who do not obtain scholarships.

Francis Mugoya, Executive Director, says,  We cannot be any less proud about the past twelve months, and would love to thank you for all the support from the previous year. With your support in 2016, we managed to organize;