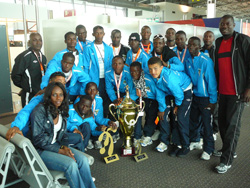 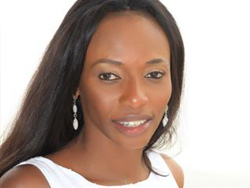 Isha Johansen is a proactive humanitarian respected at home and abroad.  Her vision to provide children and young people education, health and well-being through football in Sierra Leone has gained recognition across the globe.  NCFA’s Founder Director Ernie Brennan (EB) caught up with Isha (IJ) at the Swizz Under 16s International Cup last August where FC Johansen picked up the winner’s trophy leaving many new admirers to look inwardly at the power of football to influence children and young people
EB.  Can you tell the National Children’s Football Alliance (NCFA) about why you and your husband Arne birger Johansen  invested your time into a young football club?

IJ.  The club was established in 2004 and initially it was never the intention to form a football club. It was more of a humanitarian venture which was to support some of the orphaned and mainly underprivileged boys. The country at that time was still recovering from a brutal ten year civil war. My husband and I thought that by using football as a carrot, we could encourage the boys to stay focused in school thereby striking a balance between education and football.

EB.  What are the major problems that children and young people face playing football is Sierra Leone?
IJ.  For a start, young children, especially the socially underprivileged see football as the only means of earning a living in the future therefore it is quite a task trying to make them understand the importance of getting themselves a decent education for the future.  I think that basic logistics like transportation, kids walk miles to train at proper grounds like the national stadium practise fields. Or the football academy, which is an artifical turf supported by FIFA. Training jersey’s, boots, and all the other necessities a young footballer needs are lacking. They simply cannot afford them and neither can a great number of the clubs.
EB.  Who are the children that participate in FC Johansen?
IJ.  Any talented player is welcome for trials. The players in FC Johansen are boys mainly from socially deprived backgrounds.
EB.  Can you tell us what inspires you to carry out your work?
IJ.  Seeing how the club and the players have grown from obscurity to a household name and young sports ambassadors for their country.
EB.  Who are the biggest supporters of FC Johansen?

IJ.  I guess the youth since it is a young club with young players in comparism to other clubs in the premier league.

EB.  How successful is the Empowering Girls and Women in football projects in Sierra Leone?

IJ.  Not very as the FA in Sierra Leone are yet to put effective structures in place to get female football off the ground. That said, there has been some recent organisational changes within the FA to facilitate female football in schools and clubs.

EB.  What has been FC Johansen highlights to date?

IJ.  Taking the u-16 to participate in the Swiss U-16 cup and  emerging champions. This resulted in some of the players being invited to Chelsea, Liverpool and Manchester City Academy.
The ultimate for FC Johansen has been the club’s emergence into the premier league. We were the first division champions, with an unbeaten record of not losing a single match in the first division league.

EB.  What do you think the players get from playing in tournaments abroad and what positive aspects do these bring to the Club?

IJ.  These boys have never travelled beyond their natural environs so for them to enter into a plane alone is a big thrill. They get to meet other boys from different backgrounds and the sharing of knowledge and experiences is such a wonderful and positive injection into the club.

EB.  How important is it that the world of soccer acknowledges children who play the game in Africa?

IJ.  The talent there is abundant. The love and passion for football comes as naturally as does music and rhythm. Football is in many ways a way of life for kids in Africa.

EB.  Children in many cultures struggle to retain their birth right to play football, how does FC Johansen address this issue in the corridors of power?

IJ.  I do not think this is an issue in my country or indeed in FC Johansen. Like I said earlier, football is a way of life here so it’s a natural progression for any young boy who wants to play football to go ahead and play.

EB.  In your opinion is there scope for an International Children’s Football Alliance that could represent children on a global platform?  An organisation that supports the world’s extended children’s football family and reinforces all the good work being done by organisations and clubs such as yourself.

EB.  Is there a FC Johansen project that you would like to tell our readers about and how they might like to support the good work being done?

IJ.  My husband and I have a 30 acre land which is some 45minutes away from the city. The objective is to build and academy with a few pitches, and a club house. It is hoped that through THE JOHANSEN NATIONAL SCHOOL OF SPORTS EXCELLENCE ACADEMY, we can be able to fully engage in the educational aspect of the club. We can get the older players who have not been able to make it to the professional stage to give back to society by teaching or coaching at the academy. We will also encourage farming/agriculture as part of the academy syllabus.
In the meantime, we are in the process of securing a three storey building in the city that will serve as boarding, and educational training centre for the players.  We would be very appreciative of any support especially for the classrooms. Electronic boards, and blackboards, desks, chairs, Dinning or canteen equipments, bunk beds, pillows, sheets, lamps, you name it anything for a dormitory, classrooms and or canteen.  Many thanks, and here’s wishing your organisation and all in the football family a truly prosperous 2012.