A Saints legend met with Southampton school children in a bid to crack down on racism in football at a grass-roots level, Wednesday February 25th. 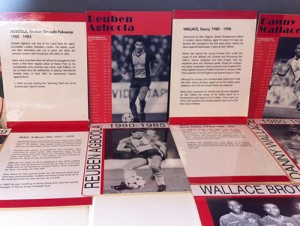 Ex-Saint Reuben Agboola handed out copies of The Black Football Heritage Book which was funded by the Heritage Lottery Fund, The book documents some of the most influential black footballers in the history of the British game.   Children from Millbrook School, Bassett Green School and other local schools viewed Southampton Football Club’s rich black football players history which was on display to promote the Racism Ain’t Saintly Campaign.

The event at the Solent University’s Test Park Sports Ground, Southampton follows an incident in Paris which caused a national scandal last week when Chelsea fans were caught on camera singing offensive chants.

Representatives from Saints, Hampshire Football Association, and Sholing FC who won the FA Vase Cup at Wembley also lent their support at the event. 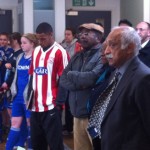 Organised by the National Children’s Football Alliance in association with Southampton Solent University, children and invited members of the public were given the opportunity to discuss racism in the game, as well as hear living history in the form of ex- Saint Reuben Agboola.

Reuben recalled that as a professional footballer he witnessed racism from the terraces which was often considered in the 70s, 80s and 90s as ‘just part of the game’.  Reuben, said, “I would often take corner kicks for the Saints, many times I would hear racism and on some one occasions I would have things thrown at me”.

Don John, founder of Black History Month and NCFA’s Race, Equality and Diversity Officer said, “I want to see an end to racism in football in all forms. Football and race have had an uncomfortable relationship in recent times heightened even more so by the behaviour of Chelsea fans in Paris. Southampton plays its small part in responding to these issues by making available these copies of this acclaimed book”.

The NCFA’s Managing Director, Ernie Brennan, said, “The Black Football Heritage Book is an important resource for young people.  It stimulates more questions which is ideal for young enquiring minds.  Racism remains in the game on and off the pitch, clearly there is institutionalised racism in football at all levels – young people have a right to know that complacency is not the answer”.

For more information about Black History