The NCFA advocate football for all. The NCFA accommodate football in all formats. The NCFA facilitate mixed ability – mixed gender football. Therefore, when we heard about Salisbury F.C we were keen to learn more. In the knowledge that Wiltshire FA’s Charter Standard Club of the year, 2018 and 2019, were carving into the conventional grass roots fraternity a football for fun approach; the NCFA sent Paul Cooper (PC) with a quill and a pot of ink, to find out more.

Dr Debbie Sayers (DS), a Legal research consultant and children’s football facilitator, takes to the dock and provides a stern case for the essence of football.

PC.  How long have Salisbury Rovers been going and when and why did you get involved?

DS. Salisbury Rovers FC was launched in April 2016.  I started the club with a couple of friends following my son’s first experience in children’s football.

My son was only 9 and I was shocked to see how directive the coaching was and how loud and sometimes abusive match time could be.  A wall of sound surrounded the children’s pitches. Parents on one pitch stood back to back with coaches on the next and you could hear the criticism. As a life-long football fan, I couldn’t see how this culture could possibly ever deliver creative, joyful footballers, let alone keep children in the game long-term.

At half-time in one match, I just said to my son ‘do you what you want. Make your own decisions. That is the fun of the game’. We never went back.

I was already running an after-school football club at a school. I just let the kids have a kickabout and numbers grew and grew. I could see the difference, the joy, in that child-owned space, so I thought, let’s start a club and see if we can replicate that! Let’s try and give the game back to the kids.

Three years later, we now have over 130 children a week coming to the club.

PC. You are quite a unique club, can you tell us about your philosophy?

DS.  We are constantly evolving, and we have produced a variety of documents which can be found on the ‘coaching’ section of our website. But, in principle, I would say that we are driven by two things:

Essentially, our aim is to keep children in the game long-term and to do this by facilitating child ownership of their game. So, one way or another, the kids shape all our sessions.

Free play is an essential part of this.  In addition to free play, our coaching emphasis is on the design of games. This is frequently done with our kids. We also coach by asking questions to encourage thinking about the game. So, we facilitate the game rather than direct kids’ learning.

Because of our approach we ask all adults (coaches and parents) to refrain from coaching from the side-lines (e.g. by telling them how to pass, who to pass to, when to shoot, where to run etc). There is no evidence that this promotes or encourages skill acquisition and it removes the fun as well as the child’s ability to make (and learn from) their own decisions. We believe that developing good decision-making skills is essential for success and, just as importantly, for fun and autonomy. 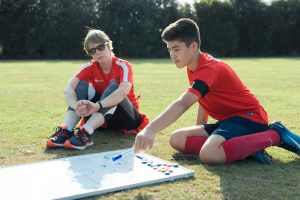 PC. Why did the club withdraw teams from the leagues?

DS. We found that structured league football (‘kids in kits in teams in leagues’) changes the environment. Coaches and parents can become preoccupied with score lines in a way they would not if the children were ‘just playing a game’.  This can detract from individual development and fun and encourage adult anxiety about position play, tactics and losing. Playing in a league may also mean that children play in formats unhelpful to fun and development. Ten children on a pitch with one ball at ages 6 or 7 means some kids might not get a touch.

The kids’ game is not the adult game and it need not look like it. By playing outside leagues we can develop a match programme tailored to our children:

– we can set and enforce our own clear standards for the playing environment;

– we can play in a variety of formats (different team sizes etc) and settings, e.g., inside/ outside;

– we can play mixed team games so kids can play alongside as well as ‘against’ other kids; and

– we can play mixed age formats.

PC. What is the award you have won from the Wilts FA?

PC.  Can you explain further your campaign for the rights of children in sport?

DS.  In April 2019, we wrote a letter to the FA which.[1] The letter raised broad concerns about the treatment of young children in football and asked the FA to take a stance on some very basic issues, for example, children’s right to be heard and the trialling of 5-year olds in to so-called ‘elite’ teams.

We have had no concrete answer to the issues raised. We believe that real change may only happen as a result of broader pressure. To this end, we have circulated a document to a variety of politicians calling for the protection of children in football.[2] We will continue to campaign on this post-election.

We need to start by recognising that children’s rights are human rights. The UK has signed up to the United Nations Convention on the Rights of the Child (although it has not been transposed into domestic law). This treaty sets out the fundamental rights of all children such as the right to play and the right to be heard. Human rights are not optional choices for adults. Children have a right to be heard in sport and we should be acting to ensure this happens.

Other countries have created clear protections and guidelines for children’s rights in sport – for example, Sweden and Norway – and we believe our children should benefit from the same protections. 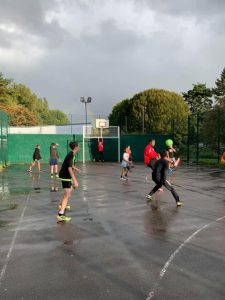 PC. Is there a network being developed of like-minded clubs and coaches? How can interested parties join?

DS.  Yes! We would urge all like-minded clubs and coaches to start by signing and circulating the free play pledge.[3] This is a commitment to implement the following pledges:

The aim is to unite progressive allies who are trying to change the youth game (and this applies to all sports) so that we can use our strength together for the benefit of children. We are also exploring ways of uniting further to campaign for change. Any coaches interested can contact me at salisburyroversfc@outlook.com