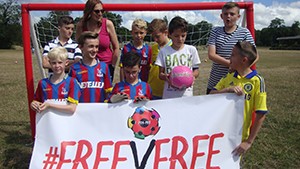 NCFA Project Manager Vanessa Wheeler writes:
A beautiful sunny afternoon in Croydon, South London and a great open space, complete with playground and café, was the setting for an NFCA Free V Free Turn Up & Play session.  11 boys, aged between 9 and 14, were swiftly joined by 5 other children who were in the park – right time, right place!  Interestingly, after an initial few minutes of playing in small groups, the children asked if I would put them into two teams.  Perhaps our children’s lives are so organised and controlled that they do not have the skills to organise themselves; or have adults taken over the children’s game of football to such an extent that the “park kickabout” no longer exists?  Once the teams had been sorted and the game started, the adults (mostly mums, 1 dad) sat in the sun and chatted.  Having delivered their children to the park, their role was now solely that of refreshment provider! 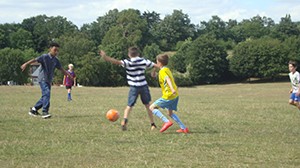 For me, the pleasure was, not only soaking up the sun, but also watching as a group of boys grew in confidence.  Every player was trying out tricks and skills, tackles and shots.  Older boys were passing to younger boys and younger boys were competing successfully with older boys.  Goalkeepers changed regularly and the children began to make their own decisions about the teams, with little tweaks here and there.  I did ask several other families in the park (who were kicking a football) whether the children would like to join us, but, sadly, only one did, a young Bulgarian lad, in the park with his mum and his friend.  Football is such a universal language! 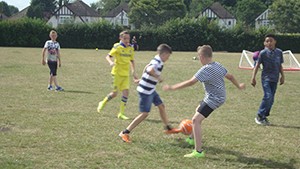 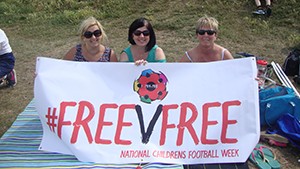