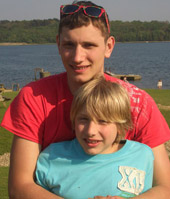 YOUTH FOOTBALL: IS IT ALL FUN AND GAMES?

Lloyd is a modest young man with a talent to observe and shape a visual narrative.  If you get the chance to watch Youth Football: Is It All Fun and Games you will find a community of footballers young and old enjoying their game without stress related adult issues and agendas,  IT CAN BE DONE.

Can you give the NCFA some back ground information as to why you made the film and who did you make it for?

LW.  For my final project at University, I was required to produce a 20 minute documentary on anything at all, as long as it had a story, and gripped the audience. I decided to do the story of Storm Lightning because I wanted other people to see the amount of passion that my mum, Vanessa Wheeler, Paul Cooper, and all the other founding members of GUBOG had for this campaign, and I wanted them to see that it does work and that football is not always about the three points. And also, I wanted my mum to see what an influence she was having on these children and that she IS doing the right thing and that these kids and the parents are grateful for all she has put into the club.

In your experience making the film did it teach you anything new about children’s football?

LW.  Yes, the experience taught me lot. My mother, Vanessa Wheeler, has taught me lot about the way that Storm FC teaches football to young kids, but I was always on the fence between playing for winning and playing to learn and for fun, but after making this film, and seeing the techniques and research performed on it, I can proudly say that I am converted and fully support GUBOG!

What is your favourite clip in the film and why do you think it worked so well?

LW.  That’s a very difficult question! But I would have to say the interview with Tony North, when he is talking about how they cannot get the children off the pitch after a game, with a shot of the kids messing around with footballs in the goal. To me, that just sums up the objective that Storm Lightning was aiming for. Interestingly, that game was a loss for Storm Lightning, possibly even into double figures, but they were still playing football, ignoring the fact that they had just lost 12-1, and just doing what they loved doing.

Why did you refer to winning as the ‘win at all cost culture’?

LW.  I referred to the ‘win at all costs culture’ in order to differentiate between two types of youth team. Those who play for enjoyment, and to fall in love with the game, and those who just want the three points. I think the ‘win at all costs’ mentality can seriously hinder and even kill off a youngsters passion for the game, which I find quite horrible. If a player is not that good at football, how are they going to become a better player if you never let them have any time on the pitch? THAT is where children develop the skills and THAT is where they fall in love with the game, not on the training pitch doing drills.

In your opinion how influential was Give Us Back Our Game in children’s football grass roots football and football in Croydon?

LW.  The concept of GUBOG had so much potential and it was a shame to see it collapse, but I think the teams where it was applied it was very influential, and the teams have been changed permanently for the better because of it.

In terms of  it changing Youth football in Croydon, I think there is a long way to go before we see the ideas and techniques from GUBOG being practiced all over the borough, but I hope it does!

What feedback have you received about the film?

LW.  At the time of this interview I haven’t got my official university marks back so I cannot comment on that side of things, but all the parents and kids who have seen it have been nothing but positive. Paul Cooper, Founder of GUBOG, has seen it, and he has said ‘Wow! My word Lloyd has worked hard on this – superb! An amazing body of work!’

Good luck Lloyd and Thank you.