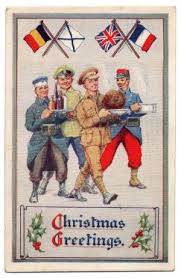 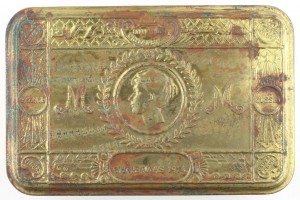 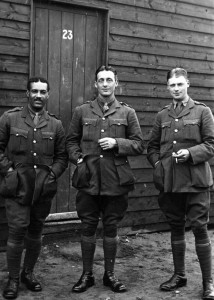 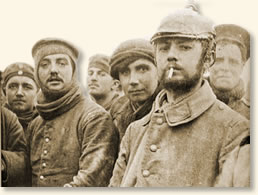 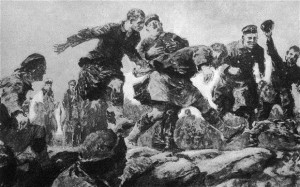 Walter Tull, the son of a Bajan carpenter and a local Kent woman was born in Folkestone in 1888. After the death of his parents, Tull was brought up in a National Children’s Home orphanage in Bethnal Green with his brother Edward.

Tull’s footballing talents were quickly spotted and he was signed by Tottenham Hotspur in time for their joint tour of South America with Everton FC. Returning to England, Tull became the first outfield black player to play professional League football, making his debut for Tottenham in September 1909 at inside forward against Sunderland. His career at Tottenham was marred by racial abuse aimed at him by rival supporters. One match in particular against Bristol City, whose supporters used horrible language. His three years at Tottenham saw him make 18 appearances in all competitions, scoring 7 goals.

Herbert Chapman’s Northampton Town bought Tull in October 1911. Tull made 110 first-team appearances for the club. When the First World War broke out Tull enlisted in the army, the first Northampton Town player to do so. It was reported in newspapers that Tull had signed to play for the Scottish club Glasgow Rangers once the war was over. Tull never got the chance to play for Rangers, as he was killed in action shortly before the war finished, having been promoted to an officer, and the first black man in British Army history to have been so and despite standing orders prohibiting Blacks to become officers in the Army. Thus ended the life of a truly remarkable man, both on and off the football field.

Why sould we Remember Walter Tull? 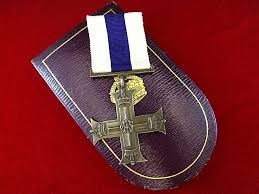 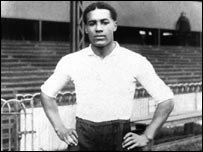 We should remember Walter Tull because of his outstanding efforts in World War One which got him recommend for the Military cross. He led his men on dangerous missions behind enemy lines and return without loss or injury. He sacrificed his life for the British Government.

He was the first black man to become an officer because military law forbade man not of ‘pure European descent’. Walter Tull was also Britain’s first black professional football player.

He shows that you can achieve so much in one life time and it doesn’t matter about your differences.
By Tess Walker
Aged 13 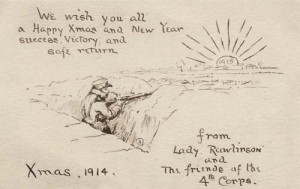 A postcard from WW1 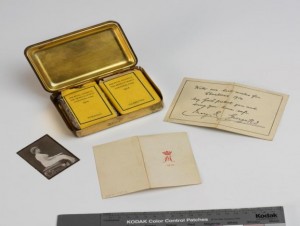 Contents of a Christmas Box

What was it?
The British and German soldiers played a game of football.
The many letters from soldiers who took part are more than sufficient evidence. Many of these letters were published in the soldier’s local paper – usually taken in to the paper by astonished families.

There was a petition to give Walter Tull a posthumously Military cross which he was recommended for by his commanding officer, Major general Sir Sydney Lawford. Unusually for officers with his service record and commendation he never received the Military cross. The manual of Military Law forbade men not of ‘pure European descent’ from becoming officers. The partition had 3,029 signatures and closed on the 6th November 2013.

He was cited for his gallantry and coolness under fire because he led his men on dangerous missions behind enemy lines and return without loss or injury.

Walter was the first black soldier to become an infantry officer in the British army. He was also Britain’s first Black professional footballer too.
By Tess Walker
Aged 13

Year 9 Football and Peace Project, Day Trip to Maidstone on the 23rd of January 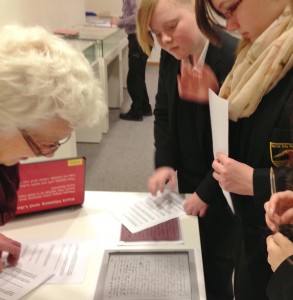 On the 23rd of January 10 Herne Bay High students visited the Maidstone Library and Museum. We started off with a talk on people from World War One and the football truce. There were many activities there to complete such as using a micro-film, looking through copies of school log books to find out information about Walter Tull. We also all read out a timeline of the war and how it affected our local area. At the end we got to look in the archive which was very exciting. We got to see pieces of work hundreds of years old.
We next visited the Maidstone museum. We got taken into a room and we got to listen to two World War One experts and got to examine artefacts from the War such as Christmas boxes and football boots. We also got to study some handmade greetings cards made in France and also the postcards they would have been able to send back home. We also looked at the other cards sent by soldiers some of which had to be destroyed if they had anything written on the back or anything incorrect, as not to give away confidential information if the Germans took it or if it gave away information the public was not meant to know. We discovered the use of propaganda in the war on the posters and how they attempted to get people to enlist. Two of the students got interviewed by the man in charge of the Football and Peace Project. They got asked lots of role play questions and their opinion on how they would feel if a family member went to war. Meanwhile one of the students got to try on the clothing and equipment that a Tommy would have worn thusly being able to understand how the soldiers would have felt physically felt from the clothing.
In the end we got to ask questions on what we did not know from World War One such as would you still find World War One bombs which are completely unexploded.
In the end we all had a great day and got a lot more knowledge on the football truce and various other facts about World War One.