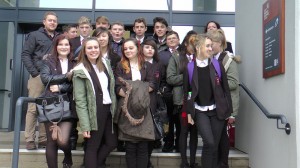 ‘I know that the Triple Alliance was also called the Central Powers, that the British used dogs and pigeons for messages and the Germans enforced their trenches with concrete’

‘Conscription and the Women’s Land Army’.

‘No because I don’t want to die’

‘I wouldn’t, I couldn’t kill someone’

‘No because I don’t believe in war – I believe that you can have a civilized conversation and compromise.  I think was is not the answer’

‘No. Because I don’t believe fighting is the answer.  I’d rather try and settle it calmly’

‘I would go to war for my country to protect it and keep it safe like it kept me safe. I also believe not to hurt any living thing’

‘Cooperate with other countries and try to work something out, there might be a way for both sides to get what they want without violence’

‘Negotiate with countries instead of getting hostile’