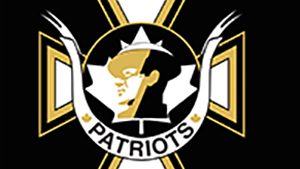 Winnipeg is now home to a new professional soccer team, playing in the newly formed Canadian Premier League. Although this professional team has no official connection to Valour Community Centre, they did choose to honour the Valour Road story, and Winnipeg’s World War I history, by naming this new professional squad Valour FC. 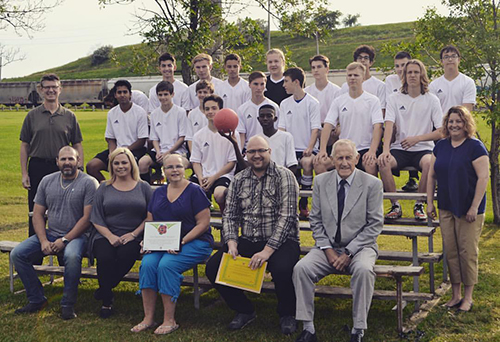 The NCFA’s Peace Fields Project, Ambassador, Mick Gale (Front row, right), presented Valour Patriots Soccer Club with their Peace Field Project Plaque, which officially twins the club’s designated area of play with Flanders Peace Field, Messines, Belgium, site of the 1914, First World War, Christmas Truces.  The ceremony was attended by a local City Councillor and a Member of the Legislative Assembly. They both reported that they were happy and excited to be the first soccer peace pitch in Canada to be twinned with Flanders Fields.

“The Valour Patriots Soccer and Mini-Soccer Clubs provide the opportunity for youth in the West End of Winnipeg, Manitoba to learn and love the game of soccer from a young age.

Our Mini-Soccer program starts at age four and shows children how fun the game of soccer, and getting outdoor physical activity can be, in general. Friendship and physical activity are the focus from ages four to six.

Youth aged seven to nine are also part of our Mini-Soccer program, but they move up to the half-field version of the game, where they learn more about the structure of soccer, preparing them to enter more competitive levels of soccer as the move along.

By age 10, our players move into the more structured provincial soccer system. Camaraderie and physical activity are still the major focus, but now, as players are older, the game becomes more competitive.

The Valour Patriots Soccer Club is comprised of a diverse array of players from many different national origins and religions. The players and parents in the program are unified in friendship and camaraderie through the game of soccer, and for the past 10 years they have been a very successful club, winning several league and tournament championships in the city of Winnipeg and the province of Manitoba.

The Valour Patriots Soccer Club, and Valour Community Centre are proud to be a part of Peace Fields Project, and we look forward to a long and fruitful partnership with the NCFA and we relish the opportunity to engage in a cross-border, cross-cultural exchange with other members of the global network of soccer/football clubs affiliated with the Peace Fields Project!” 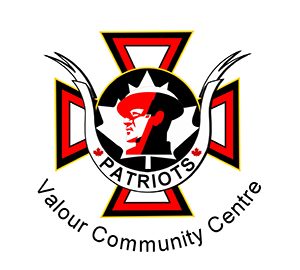