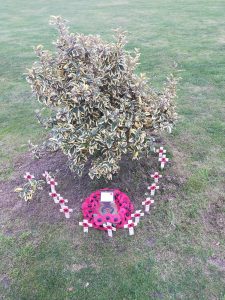 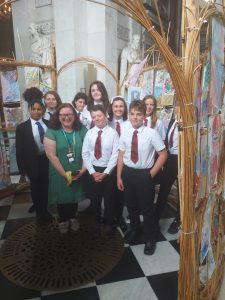 Budding artists from Oasis Academy Isle of Sheppey were excited to see their work showcased at St Paul’s Cathedral, London where it is currently open for viewing by members of the public.  The piece, created collaboratively with the Stitches in Time charity is an intergenerational project to explore cross faith ideas about what it means to have or find ‘Sacred Space’.

The students were invited by St Paul’s to contribute towards this inspirational installation due to having been impressed by the dedication the students had shown as they promoted respect and remembrance during the commemoration of the centenary of WW1 last November.  The school had hosted INSPIRE, an event which brought together the community to pay homage to the war soldiers through a series of performances, displays and re-enactment of the Christmas Day Truce football match.  A number of students had given up their weekend to make the pilgrimage to Ypres, Belgium as well as attending local poppy parades. 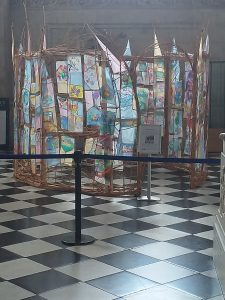 The student ideas were crafted onto textile and combined with the contributions of five other London schools to create a textile sacred space within St Paul’s Cathedral to be used for gathering and reflection.  The installation was erected three weeks ago and will be on display for another five weeks.

Paul Murray, Head of the Community Hub at Oasis Academy said “we are proud and honoured to be the only school outside of London to be invited to contribute towards this prestigious project.  It is a wonderful opportunity for the students, which they took to with gusto. They love that they are able to proudly announce they have an art piece on exhibition at St Paul’s Cathedral”

Donna McDowell, Head of Education at St Paul’s Cathedral said of the Oasis students “Everyone was struck by the enthusiasm and fun personalities of the Oasis Academy students. The conversations I had reminded me what I miss about teaching.”

The installation will continue to be on display for another five weeks.

PEACE TREE planted to commemorate the centenary of The First World War.  A marvelous INSPIRE event programme was packed full of activities, performances and key speakers, which marked a very special day on the Isle of Sheppey. 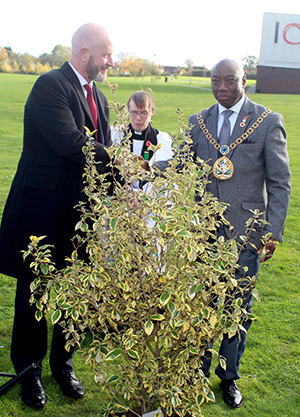 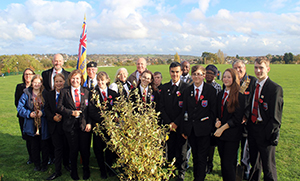 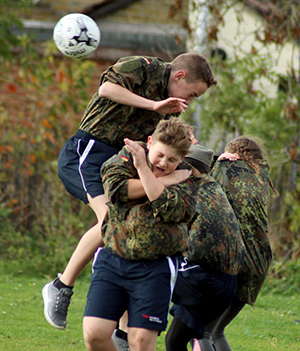 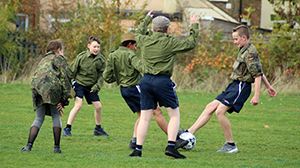 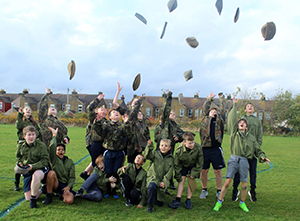 On Friday 15th June 2018, Oasis Academy held our rededication ceremony to commemorate the second anniversary of our twinning of the Academy Peace Fields with the Flanders Peace Field, Messines, Belgium; site of the World War One Christmas Truce in 1914.

With the help of Oasis Primary School Games Organiser, Alicia Nolan and a team of Year 7 Student Sports Leaders from the Academy, Year 3 and 4 children from island primary schools had the opportunity to participate in a Peace Tournament of friendly football matches on the Academy’s Peace Field.  The re-enactment of friendly football matches is a reminder to our young people of the significant events of Christmas 1914, and serves to strengthen team spirit and friendship. 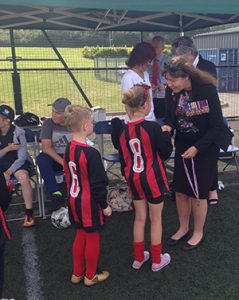 The children were given a brief history of the Peace Fields and the significance of the afternoon’s activities in remembering those that have lost their lives. The children were told that in the week leading up to Christmas 1914 groups of German, British and ally soldiers stopped fighting to sing festive songs, and ventured into what was known as “No Man’s Land” to exchange gifts and play friendly games of football.

Before kick-off, Father Frank from the Catholic Church in Sheerness blessed our fields as Peace Fields. It was lovely to hear so many young pupils join in the Lords’ Prayer with Father Frank.   The Last Post and Reveille was beautifully played by James Crane to signal the end of the minute’s silence as we remembered the fallen.

Guests from The Royal British Legion attended what was a glorious afternoon of friendly matches over tea and cakes, before giving us a hand in awarding our players and student helpers with well deserved medals. 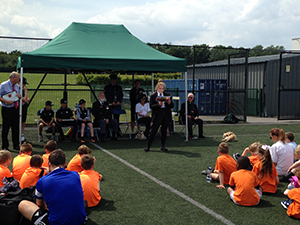 The blood of the warriors

Who fought for us.

Now we are free

From the wars that held us back.

Now we run through

With the graves buried deep beneath us.

They fought bravely with their

We remember this day as Remembrance day

And gather in crowds in the town

To commemorate the deaths that paid to keep us alive. 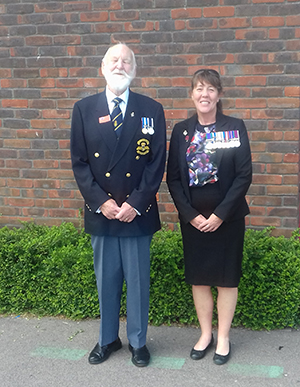 Oasis Academy Isle of Sheppey held its rededication ceremony on Friday afternoon. We had football matches between year 3 and year 4 pupils from primary schools. The event was organised and run by Alicia Nolan our Schools Games Organiser and her team of Year 7 Sports Leaders. For the event itself Jessica Masters, a student from our West Campus, read a poem she had written with her friend Louise Osbourne. Louise was ill and sadly could not attend. Both students had read the poem at the Eastchurch Aviation Celebration. Father Frank again blessed our fields as Peacefields. It was lovely to hear so many young pupils join in the Lords’ Prayer with Father Frank. James Crane, who is linked to the Air Cadets and HM Coastguard played The Last Post and Reveille.

We had guests from The Royal British Legion led by Carole Allen, Julie Austin, Mary ? and Mike Sanger. The photo is of Mike Sanger and Julie Austin. While some of the football took place our guests had cakes and drinks.  At the end of the football the pupils were presented with the medals by Carole, Julie and Mary. Medals were also presented to the Oasis Sports Leaders and the staff from all the schools for their efforts and support. The event finished at 4pm.

Alicia Nolan must get a big thank you for her excellent organisation. Our next big event is Friday November 9th to commemorate the end of World War One.

On Thursday 15th June 2017, Oasis Academy commemorate the first anniversary of our twinning of our Academy Peace Fields with the Flanders Peace Field, Messines, Belgium; site of the World War One Christmas Truce in 1914.  In the week leading up to Christmas 1914 groups of German, British and ally soldiers stopped fighting to sing festive songs, and ventured into what was known as “No Man’s Land” to exchange gifts and play friendly games of football.

With the help of Oasis Primary School Games Organiser, Melanie Tsangarides, primary school children from the island and Sittingbourne had the opportunity to participate in a Peace Tournament where they experienced various sporting activities and games on the Academy’s Peace Field.  Supported and marshalled by student helpers from Oasis Academy, children joined us from Eastchurch Primary, Minster in Sheppey Primary, St Peter’s Catholic Primary in Sittingbourne, Iwade Primary, Regis Manor Primary, Bobbing Primary, Rose Street Primary and West Minster Primary.

Dr Suzanne Lienert, Associate Principal welcomed our young visitors and explained the importance of this occasion and of Peace, reflecting on the recent attacks that has taken place across the country.  A minute’s silence was held to remember all those lives lost during the conflict, and also from recent terror attacks.  Sixth Form student Emily Collins signalled the end of the minute’s silence by playing the Last Post on the trumpet.

Father Frank Moran from the Catholic Church in Sheerness led prayers, and informed us that the letters IOSA on the side of our sports building, which stands for “Isle of Sheppey Academy” means Jesus in Gaelic.

Friendly games took place on our Peace Field to strengthen team spirit and friendship. All children received medals to remember the occasion, which they wore with pride. 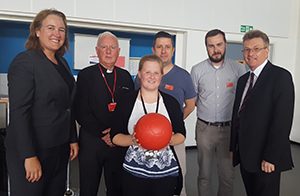 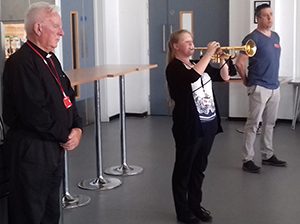 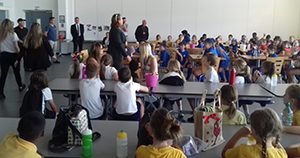 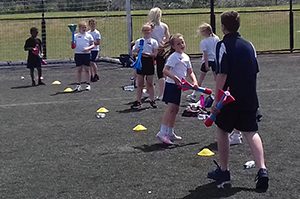 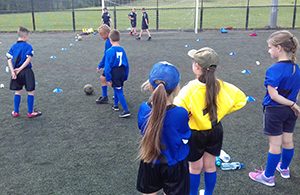 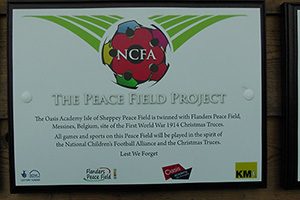 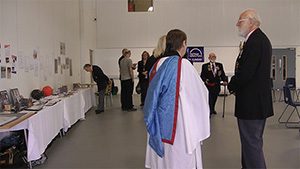 The signing of the Declaration of Peace followed Dulce et Decorum by Wilfred Owen read by P Kowalska, A Thwaites and A Leslie.   A prayer by Rev Jeanette Mclaren and then the Last Post by E Collins. 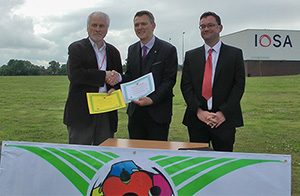 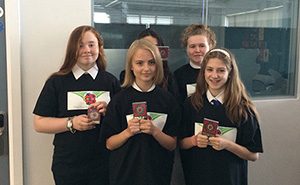 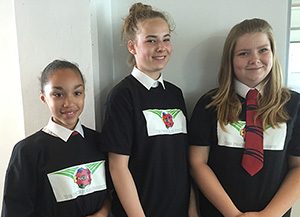 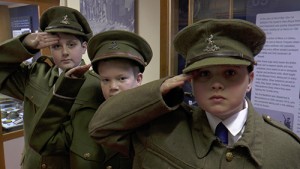 Salute to the soldiers of the First World War

What the pupils said. 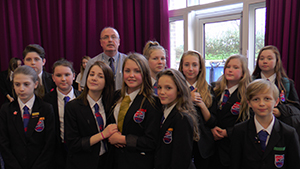 Oasis Academy attended the Gateways to the First World War lecture given by Dr Emma Hannah.  The lecture was an important part of the school’s Peace Fields Project.  Students will use their notes to help research and compile an exhibition of their work which will be displayed at their Peace Field twinning ceremony in June 2016.

Oasis Academy kicked off their Peace Field Project last week with a work shop facilitated by NCFA and Kent Libraries.

A video of the school commemorating the First World War was uploaded to help inspire other network schools Peace Fields Projects in their cross curricular work. 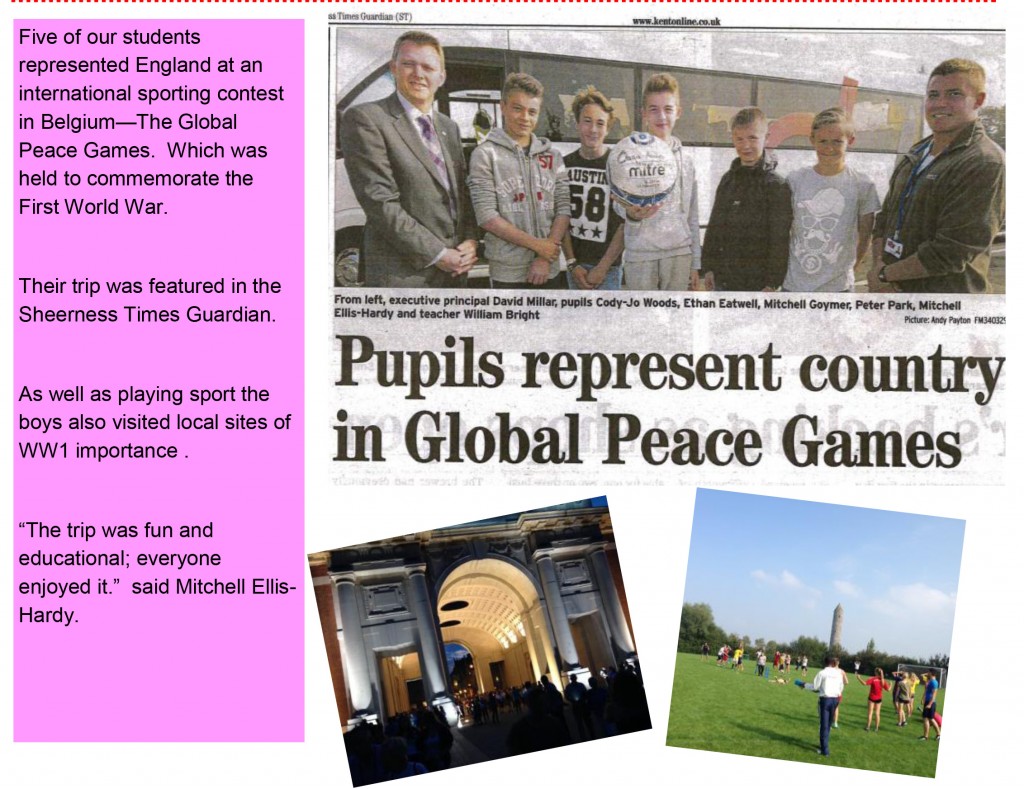 ‘It started when Arch Duke Ferdinand was shot while visiting Serbia.  A group  called the Black Hand Gang tried several times to kill him each time failing.  If they didn’t succeed they would try and kill themselves before they were tortured’

‘It was one of the most bloodiest wars and to date.

‘Yes, I would rather die a hero than a coward’

‘Eliminate violence forever and teach equality and care to every school.’

‘I would help make world peace’

‘I would help make peace throughout the world’