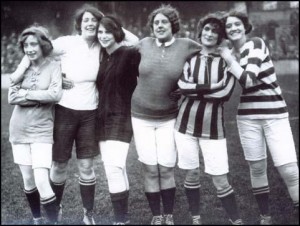 The government encouraged women to take part in sports like football, so they would stay fit and healthy whilst at work. Football became the official sport of Munition Workers, nearly every factory across Britain had a women’s football team. Women played football to raise money for charities that help wounded soldiers. Women were encouraged to play football so that the country could act as if the war was not happening.

Women did not wear a football kit; many wore a loose fitting blouse and long shorts, as well as knee-high socks. Some teams that could not afford to buy long shorts or blouses, had to use what they had. Some wore knickers instead of shorts, which was frowned upon by the Football Association.

The Football Association tried to get rid of Women’s Football as they thought it would become more popular than men’s. However, when the war ended and the men returned, men’s football became popular again and women’s was overshadowed.

Dick Kerr factory in Preston was said to be the best football team in the country during the war. They played across the UK as well as going abroad to Holland and France. A more local team is Crabble Mill Dover, which was one of the best in Kent.